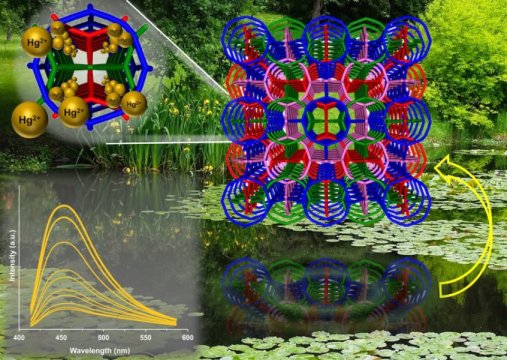 Tiny, glowing crystals designed to detect and capture heavy-metal toxins such as lead and mercury could prove to be a powerful new tool in locating and cleaning up contaminated water sources.

Motivated by publicized cases in which high levels of heavy metals were found in drinking water in Flint, Mich., and Newark, N.J., a science team led by researchers at Rutgers University used intense X-rays at Lawrence Berkeley National Laboratory (Berkeley Lab) to probe the structure of the crystals they developed and learn how they bind to heavy metals.

The crystals function like miniature, reusable sensors and traps, and are known as luminescent metal-organic frameworks, or LMOFs.

One type of LMOF that the team tested was found to selectively take up more than 99 percent of mercury from a test mixture of heavy and light metals within 30 minutes, according to recent results published in Applied Materials and Interfaces. No other MOFs have performed as well in this dual role of detecting and capturing, or “adsorbing,” toxic heavy metals, the team reported.

The ALS is one of just a few synchrotron X-ray light sources in the world that have dedicated experimental stations for chemical crystallography studies of crystallized chemical compounds such as MOFs.

It all starts with structure

What he found was a patterned, grid-like 3-D structure containing carbon, hydrogen, oxygen, nitrogen, and zinc atoms that framed large, open channels. These atomic-scale structural details are key to understanding how the LMOFs bind heavy metals, and can also aid in designing more highly specialized structures.

“With MOFs, you’re typically interested in using the holes for something,” Teat explained. In this case, the structure allows heavy metals to enter these open channels and chemically bind to the MOFs.

Their very open framework gives the MOFs an abundant surface area relative to their size, which allows them to take in a large amount of contaminants.

The LMOF structure was engineered to glow by incorporating a fluorescent chemical component, or ligand. “When the metal binds to the fluorescent ligand, the resulting framework fluoresces,” Teat said. The fluorescence of the LMOFs switches off when they interact with the heavy metals.

According to Jing Li, a chemistry professor at Rutgers University who led the research, the technology could be a money-saving solution. “Others had developed MOFs for either the detection of heavy metals or for their removal, but nobody before had really investigated one that does both,” Li added.

Intense X-rays produced at synchrotrons are the best way to map the 3-D structure of the MOFs, Li said, adding, “Knowing the crystal structures is one of the most important aspects of our research. You need those in order to perform subsequent characterizations and to understand the properties of these materials.”

In their tests, researchers found that the LMOFs bind strongly to mercury and lead, but bind weakly to lighter metals such as magnesium and calcium that are also found in water supplies but do not pose the same hazards.

This selective trait, based on the molecular makeup of the LMOFs, is important, Li said. “We need to have a MOF that is selective and will only take the harmful species.”

The LMOFs can also be recycled. Researchers found that they could collect, clean, and then reuse the LMOFs for three cycles of toxic cleansing before their performance began to degrade.

The study notes that heavily industrialized areas, cities with antiquated water regulations, and agricultural communities can be particularly susceptible to groundwater contamination, which can lead to soil contamination if not addressed. This can cause the contaminants to be taken up by plants and animals in the surrounding environment, broadening the pathways of exposure.

Li said that further R&D could explore lower-cost and more durable LMOFs that could last for more cycles, and researchers could also pursue the development of water filters by blending the LMOFs with polymers to create a solid film. “These filters could be used for capture on a larger scale,” she said.

“We would like to continue with this research,” Li said, adding that her team would like to test the system’s performance on actual contaminated water sources if funding becomes available. “These are promising results, but we have a long way to go.”

Her team also has used Berkeley Lab’s ALS to determine the crystal structures of MOFs for a wide variety of other applications, including high-explosives detection; toxin detection in foods; and new types of light-emitting components for LEDs, known as phosphors, that incorporate cheaper, more abundant materials.

Now any Xbox One can be used to develop games