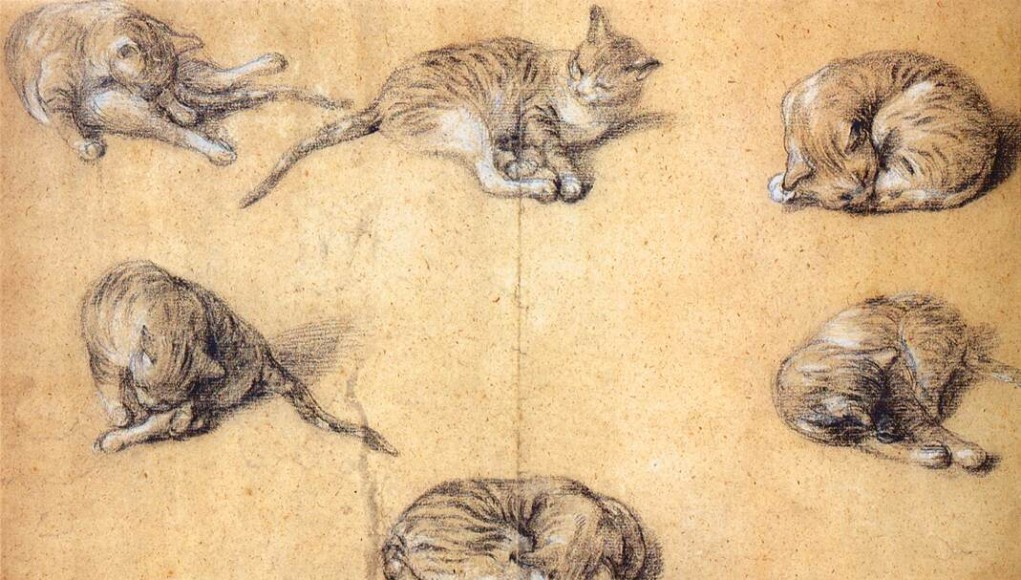 Leonardo da Vinci may have been ahead of the curve in aerodynamics, anatomy and mechanics, but he also possessed an incredible foresight for another modern staple: cat obsessions.

In some of the last years of his life, Leonardo sat down, perhaps at his desk, perhaps on the street, took out his pencil and absent-mindedly sketched a cat. The resulting drawing is of not just one, but over a dozen of them, grooming, playing and fighting each other, with a couple of stalking lions thrown into the mix and to top it all, a slinky little dragon sinuously twisting backwards and baring its teeth. Evidently he appreciated them for their personalities and characteristics: not such a jump from cat doodles to the ubiquity of cats on social media today.

In the week that the latest blockbuster exhibition on Leonardo da Vinci, The Mechanics of Genius, opens to great fanfare at the Science Museum, a second, much smaller show is opening in Newcastle. The Laing Gallery’s exhibition showcases just ten of Leonardo’s best drawings from the extensive collections at Windsor, cats included. Whereas the Science Museum showcases the extraordinary mechanical genius of this remarkable artist, these drawings offers a more playful insight into Leonardo’s mind.

Cats were a commonplace sight in medieval and early modern houses, kept as pets to curb the mouse population. They sometimes left quite unexpected traces, such as the medieval moggy who marched over the still wet pages of a manuscript, much to the consternation of its scribe. And clearly they featured in more of an esoteric manner too: there are countless depictions of cats within medieval manuscripts, as featured in Nicole Eddy’s fabulous post on the “Lolcats of the Middle Ages”.

So it’s not so surprising to find Leonardo caught in the act of doodling. It seems as though Leonardo’s cats are drawn from life, attesting to his often commented on interest in first-hand observation. He lets his imagination run riot in the process of turning his playful cats into a writhing dragon.

What makes his drawing so charming is that ultimately, what he is interested in here is nothing more significant than the playing cats. He draws cats on other occasions, such as in some studies for the Virgin and child (with cat), but there the cat is drawn as an attribute, becoming a subsidiary accessory to the telling of the story. In the cat doodle, the purpose of the drawing is nothing other than to record Leonardo’s delight in the carefully observed play and movement of his feline companions.

There’s a rich history of associating cats with imagination and creativity, as well as more negative connotations with heresy and wilfulness. This is especially true of medieval imagery.

Cats, with their noted reputation for autonomy and independence, provide a bridge between the unruly and uncontrollable chaos of untamed nature, and the quiet, submissive, orderly domesticity of a well-ruled household. A cat can function both as a symbol for obedience (and is often depicted as such, for example as a companion to devout women) as well as a sign of heresy, in the shape of a witch’s familiar.

So cats are not inherently good or evil. Instead they appear to reflect the moral character of the household they interact with: in accordance with their mercurial, quirky nature. In this light, they seem the perfect companion for a creative and scholarly owner.

Fast forward 500 years and perhaps it doesn’t seem so surprising that social media has become the perfect vehicle for displaying this connection. While Salvador Dali needed to take long walks with his pet ocelot Babou to generate interest in his unusual status pet, Twitter and Facebook offer platforms for often quite witty plays on the link between cats and creativity.

Online social media use does not impair our ability to concentrate

What do Americans fear?