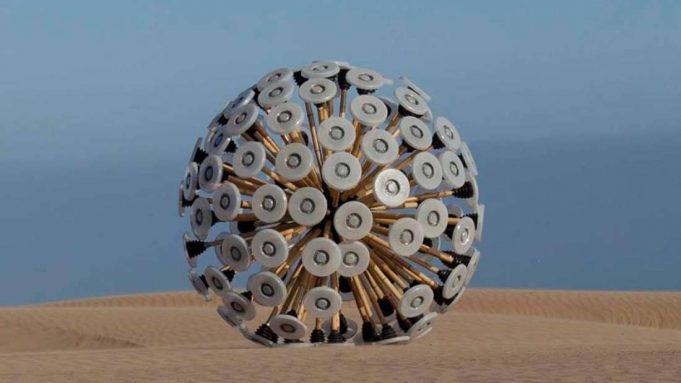 Meet the minesweepers of the future. This thing might look like a dandelion that has tumbled from the future, but it has helped its designer develop the next wave of anti-landmine technology.

The brain behind the original contraption and the new technology is Massoud Hassani, a designer born and raised in Kabul, Afghanistan, until the age of 11, when his family moved to the Netherlands. Afghanistan is still thought to have millions of landmines lying around, most of which are left over from the war between the Soviet Union and anti-communist Afghani guerrillas from 1979 to 1989. As a child in Kabul, Hassani used to play in the dusty fields with homemade wind-powered toys. With this memory in his mind and faced with the continuing problem of landmines, the invention was born.

A few years ago, the tumbleweed-like Mine Kafon caught the public’s attention following a Kickstarter campaign and a beautifully shot short film (below) about Hassani. The basic premise is the orb will roll along the ground, blown by the wind, and set-off any landmines it lands on.

While no doubt an interesting idea, it was always more of a piece of art used to spread awareness of the issue. But now, the designer is back with his brother Mahmud with the newly developed Mine Kafon Drone. Using a metal detector, the drone hovers above the land and detects mines, all without applying any pressure that could spark the bomb.

Equipped with an aerial 3D-mapping system with GPS waypoints, this technique is said to be 20 times faster than the current technology used to find mines. Once the mines are identified, the drone is able to drop a small detonator on the mine with a robotic arm. The company believe their method could make the process up to 200 times faster.

They aren’t the only ones interested in using aerial drones to tackle landmines. Just this month, 14-year-old Harshwardhan Zala received a $730,000 grant from the Indian government to develop an anti-landmine drone.

Who knows whether these companies or start-ups will win the “arms race” of anti-landmine tech, but it’s certainly a race that can only benefit the wider world.

Scientists store digital images in DNA, and retrieves them perfectly