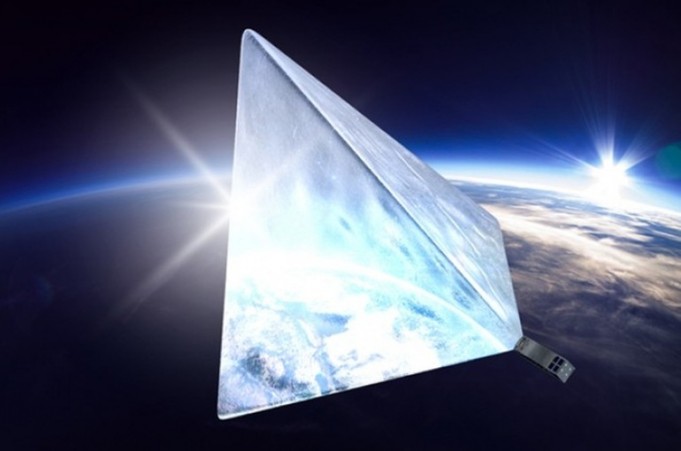 Remember that somewhat audacious Russian proposal to launch a satellite that would become the “brightest star in the night sky”? Well, they’re back with a new round of funding on Kickstarter and it looks like a launch is actually going to go ahead, as early as August this year.

First, a quick recap: The small spacecraft, named Mayak, is about the size of a loaf of bread. On board, it has a folded-up solar reflector made of Mylar, and when it reaches its intended orbit – about 600 kilometers (370 miles) high – this will unfurl into a large pyramid shape using rigid extendable rods. Each edge will be 2.7 meters (9 feet) long, with a total surface area of 6 square meters (65 square feet).

The reflection of the Sun off this structure should make Mayak bright enough to see with the naked eye in the night sky, while the atmospheric drag from the reflector will cause Mayak to re-enter the atmosphere after about a month. The spacecraft does not have its own propulsion, with its initial orbit simply being left to degrade.

The goal of the satellite is not just to create a bright object in the night sky, though, something you’ll be able to track with an app. The team of scientists from Moscow State Mechanical Engineering University want to showcase how this technology could be used on future satellites, to deorbit them safely via this aerobraking method and reduce the amount of space debris in orbit.

Speaking to IFLScience, project leader Alex Shaenko said they wanted to show what was possible in terms of spaceflight by a small team of enthusiasts. “The idea was to make an applicable construction that can be deployed on large scales,” he said.

When fully deployed, Mayak will shine with a magnitude (a measure of brightness) of at least -2, making it slightly brighter than the brightest star in the night sky, Sirius. However, Shaenko said it had the potential to shine as bright as magnitude -10, much brighter than Venus. This will depend on how many imperfections are on the material’s surface, among several other factors.

Mayak will orbit with an inclination of 90 degrees in a Sun-synchronous orbit, which means it will orbit from pole to pole, making it visible from almost anywhere on Earth as the planet rotates.

When we first reported on this, though, some in the astronomy community were worried that the brightness could pose a problem to scientific observations. “We fight so hard for dark skies in and around our planet,” astronomer Nick Howes, former deputy director of the Kielder Observatory in Northumberland, told IFLScience. “To see this being potentially ruined by some ridiculous crowdfunded nonsense makes my heart simply despair.”

But Shaenko said this shouldn’t be an issue, because astronomers on the ground will be able to track the motion of Mayak, and remove it from their observations. “It will not be a problem,” he said. “There are a lot of spacecraft flying in the night sky, some even brighter than Mayak.”

With this latest round of funding on Kickstarter, the team is hoping to secure the last of the 9 million rubles ($130,000) they need for the project. At the moment, the Russian space agency Roscosmos has earmarked them a “piggyback” slot on the launch of the Kanopus-V-IK satellite in August 2016. A backup window for launch is available in December.

If it does go ahead, despite concerns on its brightness, Mayak could prove to be pretty impressive. And if successful, perhaps similar technology will one day be used to help clear Earth orbit of unwanted space junk, and help lessen the growing problem of space debris.

Following Mayak, the team might even try something more ambitious, with Shaenko saying that a bigger successor could be built and launched in the future.

Supernova iron found on the moon