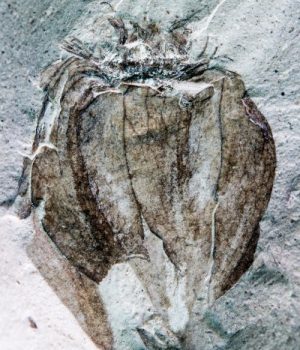 Delicate fossil remains of tomatillos found in Patagonia, Argentina, show that this branch of the economically important family that also includes potatoes, peppers, tobacco, petunias and tomatoes existed 52 million years ago, long before the dates previously ascribed to these species, according to an international team of scientists.

Tomatillos, ground cherries and husk tomatoes members of the physalis genus are unusual because they have papery, lantern-like husks, known to botanists as inflated calyces that grow after fertilization to extend around their fleshy, often edible berries.

They are a small portion of the nightshade family, which includes many commercially, scientifically and culturally valuable plants among its more than 2,400 living species. This entire family has had a notably poor fossil record, limited to tiny seeds and wood with little diagnostic value that drastically limited understanding of when and where it evolved.

The researchers examined two fossil lantern fruit collected at Laguna del Hunco, Chubut, Patagonia, Argentina, in an area that was temperate rainforest when the plants grew, 52 million years ago. These are the only physalis fossils found among more than 6,000 fossils collected from this remote area, and they preserve very delicate features such as the papery husk and the berry itself.

The fossil site, which has been the focus of a Penn State, Museo Palentologico Egidio Feruglio, Trelew, Argentina, and Cornell University project for more than a decade, was part of terminal Gondwana, comprised of the adjacent landmasses of South America, Antarctica and Australia during a warm period of Earth history, just before their final separation.

“These astonishing, extremely rare specimens of physalis fruits are the only two fossils known of the entire nightshade family that preserve enough information to be assigned to a genus within the family,” said Peter Wilf, professor of geosciences, Penn State.

“We exhaustively analyzed every detail of these fossils in comparison with all potential living relatives and there is no question that they represent the world’s first physalis fossils and the first fossil fruits of the nightshade family. Physalis sits near the tips of the nightshade family’s evolutionary tree, meaning that the nightshades as a whole, contrary to what was thought, are far older than 52 million years.”

Typically, researchers look for fossilized fruits or flowers as their first choice in identifying ancient plants. Because the fruits of the nightshade family are very delicate and largely come from herbaceous plants with low biomass, they have little potential to fossilize.

The leaves and flowers are also unknown from the fossil record. This presents a problem for understanding when and where the group evolved and limits the use of fossils to calibrate molecular divergence dating of these plants.

Molecular dating of family trees relies on actual dates of fossils in the family to work from. Because the previous dated fossils had little diagnostic value beyond their membership in the large nightshade family, molecular dating was difficult.

The researchers note in Science that “The fossils are significantly older than corresponding molecular divergence dates and demonstrate an ancient history for the inflated calyx syndrome.”

Molecular dates calibrated with previous fossils had placed the entire nightshade family at 35 to 51 million year ago and the tomatillo group, to which the 52 million year old fossils belong, at only 9 to 11 million years ago.

Using direct geologic dating of materials found with the fossils — argon-argon dating of volcanic tuffs and recognition of two magnetic reversals of the Earth’s poles — the team had previously dated the rocks containing the fossil fruit to 52 million years ago.

“Paleobotanical discoveries in Patagonia are probably destined to revolutionize some traditional views on the origin and evolution of the plant kingdom,” said N. Rubén Cúneo, CONICET, Museo Palentológico Egidio Feruglio.

“In this regard, the Penn State/ MEF/Cornell scientific partnership is showing the strength of international collaborations to bring light and new challenges to the exciting world of discovering the secrets of Earth life.”

Mónica Carvalho, former Penn State M.S. student now a Ph.D. student at the School of Integrative Plant Science, Cornell, and Wilf did the evolutionary analysis of the morphology of current members of the family and the fossils, combined with genetic analysis of the living species.

“These fossils are one of a kind, since the delicate papery covers of lantern fruits are rarely preserved as fossils,” Carvalho said.

“Our fossils show that the evolutionary history of this plant family is much older than previously considered, particularly in South America, and they unveil important implications for understanding the diversification of the family.”

All members of the physalis genus are New World species inhabiting South, Central and North America. Their center of diversity is Mexico.

The researchers note that the physalis fossils show a rare link from late-Gondwanan Patagonian to living New World plants, but most other fossil plants, such as eucalyptus, found at the site have living relatives concentrated in Australasia.

That pattern reflects the ancient overland connection across terminal Gondwana from South America to Australia through Antarctica. The new research raises the possibility that more, potentially much older, nightshade fossils may be found at far southern locations.