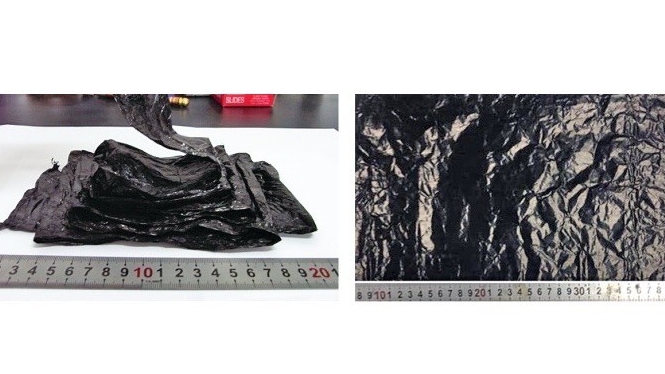 While the material pictured above might not look like much, it is actually both stronger and more pliable than kevlar or carbon fiber.

Developed by researchers from the East China University of Science & Technology, the film is made from carbon nanotubes, getting its strength from tubes that remain aligned parallel to each other, as opposed to other materials that use different layouts.

The process to create the carbon nanotube material is comparable to glass-blowing, with the team of researchers coating a tube with a layer of carbon nanotubes using nitrogen gas, and then putting in a furnace at a temperature of 2,100°F. Afterwards, the tubular material cools in a flattened position, as a layer of film, which can then be compressed further under pressure.

Not only is the new film stronger than existing materials, with an average of 9.6 gigapascals compared to kevlar’s 3.7 GPa and carbon fiber’s 7 GPa, but it can be stretched as well, with an 8% extension rate. That tops carbon fiber’s stretching ability of 2% by a significant deal.

The hope is that the material will find use as a structural coating for things like vehicles or aerospace parts, and since it offers electrical conductivity it could act as electrodes at one point.