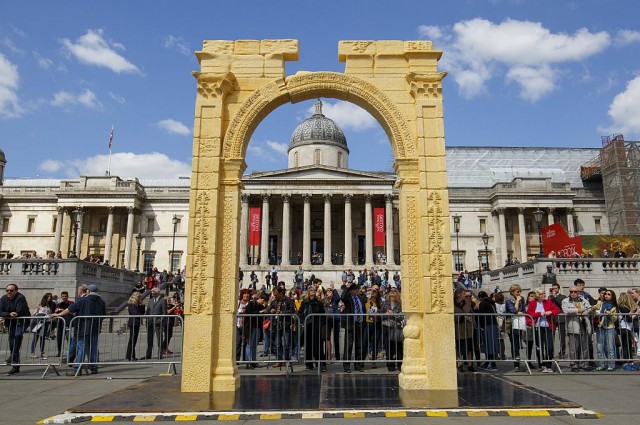 Syria’s Palmyra Arch, often called the Arch of Triumph, was destroyed by Islamic State militants in October 2015. But thanks to digital 3D scanning technology and some handy robots, this lost piece of history, engineering, and beauty has been recreated in central London.

The model was created by experts from the Institute of Digital Archaeology. Archaeologists were able to create a three-dimensional digital model using photographs of the original arch. Robots then used this data to carve pieces of Egyptian marble into the shape of the arch. The recreation is two-thirds the size of the original, measuring just under 6 meters (20 feet) in height, the Guardian reports.

The original arch was built by the Romans in Palmyra, Syria, in the 3rd century CE under the reign of emperor Septimius Severus.

You can see the amazing robotic carving of the new arch in the video below. Although, perhaps even more amazingly, the original was hand-built and carved 1,800 years ago.

London Mayor Boris Johnson unveiled the recreated arch in Trafalgar Square on April 19. The arch will stand in London for three days, where it will then be moved and put on public display in New York and Dubai.

Mohammed Abdullah Al Gergawi, United Arab Emirates’ Minister of Cabinet Affairs and The Future, who is involved in the project, said in a statement: “By using digital techniques to map and preserve monuments and other aspects of shared human history, we are able to ensure that nobody can deny history or dictate that their narrative or ideology stands above the shared story of all humanity and our shared aspiration to live together in harmony.”