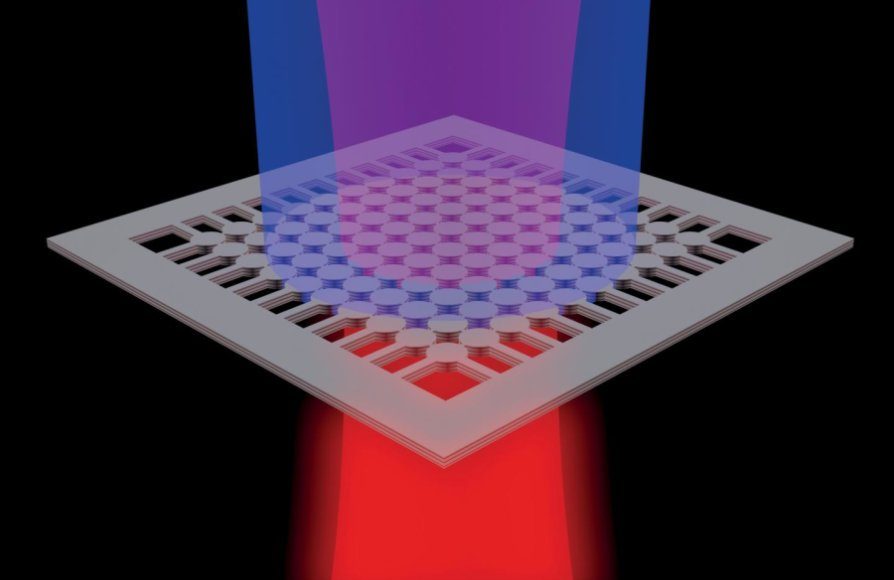 Researchers at the University of California San Diego have demonstrated the world’s first laser based on an unconventional wave physics phenomenon called bound states in the continuum.
The technology could revolutionize the development of surface lasers, making them more compact and energy-efficient for communications and computing applications. The new BIC lasers could also be developed as high-power lasers for industrial and defense applications.

“Lasers are ubiquitous in the present day world, from simple everyday laser pointers to complex laser interferometers used to detect gravitational waves. Our current research will impact many areas of laser applications,” said Ashok Kodigala, an electrical engineering Ph.D. student at UC San Diego and first author of the study.

“Because they are unconventional, BIC lasers offer unique and unprecedented properties that haven’t yet been realized with existing laser technologies,” said Boubacar Kanté, electrical engineering professor at the UC San Diego Jacobs School of Engineering who led the research.

For example, BIC lasers can be readily tuned to emit beams of different wavelengths, a useful feature for medical lasers made to precisely target cancer cells without damaging normal tissue.

BIC lasers can also be made to emit beams with specially engineered shapes (spiral, donut or bell curve) called vector beams which could enable increasingly powerful computers and optical communication systems that can carry up to 10 times more information than existing ones.

“Light sources are key components of optical data communications technology in cell phones, computers and astronomy, for example. In this work, we present a new kind of light source that is more efficient than what’s available today in terms of power consumption and speed,” said Babak Bahari, an electrical engineering Ph.D. student in Kanté’s lab and a co-author of the study.

Bound states in the continuum (BICs) are phenomena that have been predicted to exist since 1929. BICs are waves that remain perfectly confined, or bound, in an open system. Conventional waves in an open system escape, but BICs defy this norm — they stay localized and do not escape despite having open pathways to do so.

In a previous study, Kanté and his team demonstrated, at microwave frequencies, that BICs could be used to efficiently trap and store light to enable strong light-matter interaction. Now, they’re harnessing BICs to demonstrate new types of lasers. The team published the work Jan. 12 in Nature.

The BIC laser in this work is constructed from a thin semiconductor membrane made of indium, gallium, arsenic and phosphorus. The membrane is structured as an array of nano-sized cylinders suspended in air. The cylinders are interconnected by a network of supporting bridges, which provide mechanical stability to the device.

“Right now, this is a proof of concept demonstration that we can indeed achieve lasing action with BICs,” Kanté said.

“And what’s remarkable is that we can get surface lasing to occur with arrays as small as 8 × 8 particles,” he said. In comparison, the surface lasers that are widely used in data communications and high-precision sensing, called VCSELs (vertical-cavity surface-emitting lasers), need much larger (100 times) arrays and thus more power to achieve lasing.

“The popular VCSEL may one day be replaced by what we’re calling the ‘BICSEL’ bound state in the continuum surface-emitting laser, which could lead to smaller devices that consume less power,” Kanté said. The team has filed a patent for the new type of light source.

The array can also be scaled up in size to create high power lasers for industrial and defense applications, he noted. “A fundamental challenge in high power lasers is heating and with the predicted efficiencies of our BIC lasers, a new era of laser technologies may become possible,” Kanté said.

The team’s next step is to make BIC lasers that are electrically powered, rather than optically powered by another laser. “An electrically pumped laser is easily portable outside the lab and can run off a conventional battery source,” Kanté said.

Scientists explain evolution of some of the largest dinosaurs