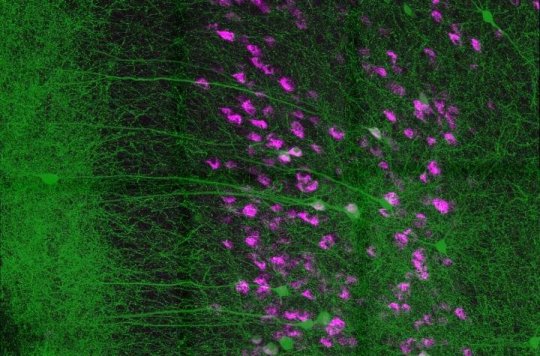 From fighting the urge to hit someone to resisting the temptation to run off stage instead of giving that public speech, we are often confronted with situations where we have to curb our instincts. Scientists at EMBL have traced exactly which neuronal projections prevent social animals like us from acting out such impulses.
The study, published online in Nature Neuroscience, could have implications for schizophrenia and mood disorders like depression.

“Instincts like fear and sex are important, but you don’t want to be acting on them all the time,” says Cornelius Gross, who led the work at EMBL. “We need to be able to dynamically control our instinctive behaviors, depending on the situation.”

The driver of our instincts is the brainstem the region at the very base of your brain, just above the spinal chord. Scientists have known for some time that another brain region, the prefrontal cortex, plays a role in keeping those instincts in check [see box]. But exactly how the prefrontal cortex puts a break on the brainstem has remained unclear.

Gross and colleagues went on to confirm that this physical connection was the brake that inhibits instinctive behavior. They found that in mice that have been repeatedly defeated by another mouse the murine equivalent to being bullied this connection weakens, and the mice act more scared.

The scientists found that they could elicit those same fearful behaviors in mice that had never been bullied, simply by using drugs to block the connection between prefrontal cortex and brainstem.

These findings provide an anatomical explanation for why it’s much easier to stop yourself from hitting someone than it is to stop yourself from feeling aggressive. The scientists found that the connection from the prefrontal cortex is to a very specific region of the brainstem, called the PAG, which is responsible for the acting out of our instincts.

The work has implications for schizophrenia and mood disorders such as depression, which have been linked to problems with prefrontal cortex function and maturation.

“One fascinating implication we’re looking at now is that we know the pre-frontal cortex matures during adolescence. Kids are really bad at inhibiting their instincts; they don’t have this control,” says Gross, “so we’re trying to figure out how this inhibition comes about, especially as many mental illnesses like mood disorders are typically adult-onset.”