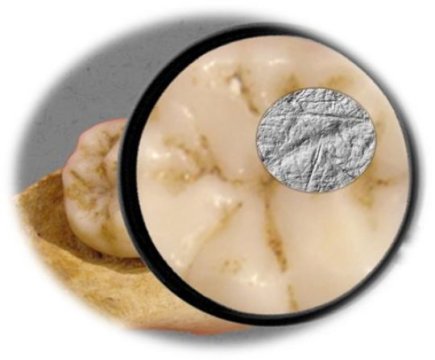 Over hundreds of thousands of years, the Neandertal lineage developed successfully in western Eurasia and survived severe fluctuations between colder and warmer climactic cycles of the Ice Age.

The Neandertals disappeared at the high point of the last glacial period around 40 thousand years ago, at approximately the same time that modern humans migrated into Europe.

What led to the Neandertals’ decline remains unclear. Dr. Sireen El Zaatari of the Institute of Prehistory, Early History, and Medieval Archaeology of the University of Tübingen has been exploring this question in cooperation with colleagues from the Max Planck Institute for Evolutionary Anthropology in Leipzig and Stony Brook University and the University of Arkansas at Fayetteville in the US.

They have been examining what influence dietary strategies could have had on human development. By analyzing microwear traces on the fossilized molars of Neandertals and Upper Paleolithic modern humans, the researchers were able to draw conclusions about diet type and establish a relationship with prevalent climactic conditions.

They also discovered clear differences in behavior. Neandertals adapted their diet to the resources that were most readily available and easily accessible, while modern humans seemed to have invested more effort in accessing food resources.

Modern humans’ changes in diet were possibly more strongly marked by the use of new technologies in obtaining food. The researchers concluded that Upper Paleolithic modern humans’ differing dietary strategies may have given them an advantage over the Neandertals.

“Actually, one would expect that the Neandertals would be better adapted to the occasionally very harsh climatic conditions in Ice Age Europe,” says Sireen El Zaatari. “They developed there, while anatomically modern humans evolved in Africa and only migrated to Europe much later,” she explains.

El Zaatari is able to draw conclusions about diet by assessing the type and degree of microwear on the molars. The data for her study were taken from the remains of 52 European and Levantine individuals Neandertals and Upper Paleolithic humans from 37 sites dating back to between 500,000 and 12,000 years before the present.

“The alternation between colder and warmer phases reshaped the landscape again and again. Sometimes, the habitat was that of the steppe, at other times, there were forests,” says El Zaatari.

Her investigation indicates that the Neandertals were capable of adapting to changes in food resources. In steppe habitats the Neandertals primarily ate meat. Forests, on the other hand, offered a variety of plant foods which the Neandertals appear to have exploited.

In forested landscapes, the Neandertals’ diet included, in addition to meat, significant amounts of plants, such as hard seeds and nuts, which resulted in more complex patterns of tooth microwear. “The Neandertals successfully mastered these adjustments over a long period of time,” says El Zaatari. For modern humans, she was able to more closely connect the changes in their diet to cultural developments.

Modern humans seemed to stick to their dietary strategy regardless of slight environmental changes and retained a relatively large proportion of plant-based foods in their diet even in predominantly steppe landscapes. “To be able to do this, they developed tools, for example, for getting at roots in the soil,” El Zaatari says.

The results of the study do not support the frequent assumption that the Neandertals tended to be inflexible and therefore at a disadvantage. But around 42 thousand years ago, additional competition arrived in the form of modern humans. “If the differing dietary strategies were already established by the time of the encounter, then modern humans might have had the advantage,” says Sireen El Zaatari.

Pollution emitted near equator has biggest impact on global ozone