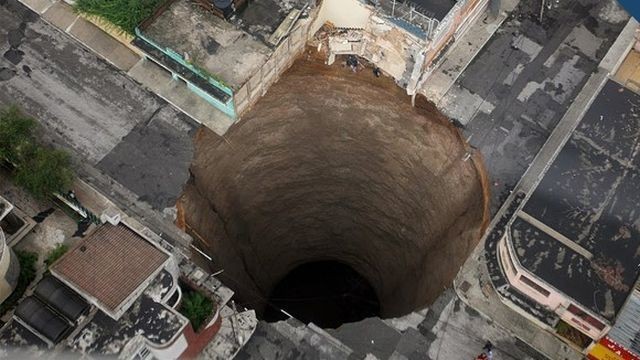 The Kola Superdeep Borehole (Russian: Кольская сверхглубокая скважина, Kolskaya sverkhglubokaya skvazhina) is the result of a scientific drilling project of the Soviet Union in the Pechengsky District, on the Kola Peninsula, longitude and latitude coordinate: 69°23′46.39″N 30°36′31.20″E . The project attempted to drill as deep as possible into the Earth’s crust. Drilling began on 24 May 1970 using the Uralmash-4E, and later the Uralmash-15000 series drilling rig. A number of boreholes were drilled by branching from a central hole.

The Kola borehole penetrated about a third of the way through the Baltic continental crust, estimated to be around 35 kilometres (22 mi) deep, reaching rocks of Archaean age (greater than 2.5 billion years old) at the bottom.[7] The project has been a site of extensive geophysical studies. The stated areas of study were the deep structure of the Baltic Shield; seismic discontinuities and the thermal regime in the Earth’s crust; the physical and chemical composition of the deep crust and the transition from upper to lower crust; lithospheric geophysics; and to create and develop technologies for deep geophysical study.

To scientists, one of the more fascinating findings to emerge from this well is that no transition from granite to basalt was found at the depth of about 7 km, where the velocity of seismic waves has a discontinuity. Instead the change in the seismic wave velocity is caused by a metamorphic transition in the granite rock. In addition, the rock at that depth had been thoroughly fractured and was saturated with water, which was surprising. This water, unlike surface water, must have come from deep-crust minerals and had been unable to reach the surface because of a layer of impermeable rock.[8]

Another unexpected discovery was a large quantity of hydrogen gas; the mud that flowed out of the hole was described as “boiling” with hydrogen

The United States had embarked on a similar project in 1957, dubbed Project Mohole, which was intended to penetrate the shallow crust under the Pacific Ocean off Mexico. However, after some initial drilling, the project was abandoned in 1966 because of a lack of funding. This failure inspired the great successes of the Ocean Drilling Program, Integrated Ocean Drilling Program and the present International Ocean Discovery Program.

The KTB superdeep borehole (German Continental Deep Drilling Program, 1990–1994) at Windischeschenbach in northern Bavaria was drilled down to a depth of 9,101 m (29,859 ft) reaching temperatures of more than 260 °C (500 °F). Its ambitious measuring program used high-temperature logging tools that were upgraded specifically for KTB.[11]

How human brains do language: One system, two channels