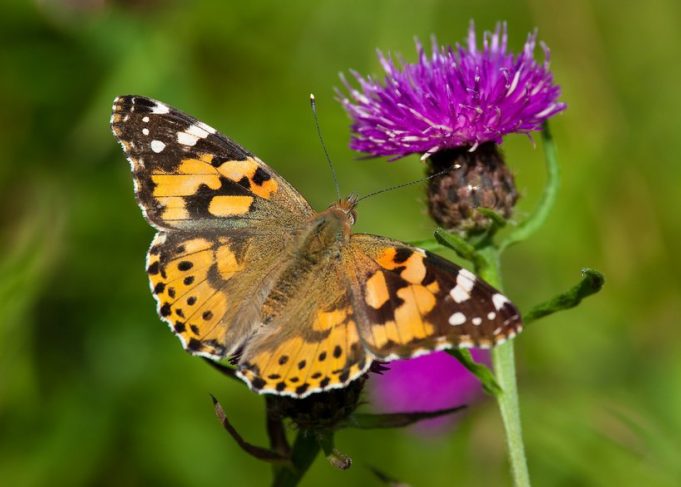 A decade of monitoring aerial insect migration reveals that trillions of individuals travel above us each year. Migration contributes greatly to seasonal exchanges of biomass and nutrients across the Earth’s surface; however, even though insect migration surpasses all other aerial migratory phenomena in terms of sheer abundance, it remains largely unquantified.

For the first time, scientists have measured the movements of high-flying insects in the skies over southern England and found that about 3.5 trillion migrate over the region every year.

This movement of 3,200 tons of biomass, captured by University of Exeter and Rothamsted Research using specialised radar techniques, is more than seven times the mass of the 30 million songbirds which depart the UK for Africa each autumn.

(It is also the equivalent of about 20,000 flying reindeer.)

Dr Jason Chapman, of the Centre for Ecology and Conservation at the University of Exeter’s Penryn Campus in Cornwall, said: “Insect bodies are rich in nutrients and the importance of these movements is underappreciated.

“If the densities observed over southern UK are extrapolated to the airspace above all continental landmasses, high-altitude insect migration represents the most important annual animal movement in ecosystems on land, comparable to the most significant oceanic migrations.”

Although the origin and destination of each insect was not recorded, evidence from previous research suggests many will have been travelling to and from the UK over the English Channel and North Sea.

The scientists recorded movement above radar sites in southern England and found large seasonal differences, with mass migrations of insects generally going northwards in spring and southwards in autumn.

Until now, radar studies have measured migrations of relatively few nocturnal species of agricultural pests, and no study previously examined the vast numbers of daytime migrants.

The study found seasonal variations from year to year, but overall the net northward spring movements of larger insects were almost exactly cancelled out by net southward movements in autumn over the 10-year research period.

He said: “Many of the insects we studied provide important ecological services which are essential for maintaining healthy ecosystems, such as pollination, predation of crop pests and providing food for insectivorous birds and bats.”

“Animal migration, especially in insects, is a very complex behaviour which takes millions of year to evolve and is very sensitive to climatic condition,” he said.

“Global climatic change could cause decline of many species, but equally other highly adaptable species thrive and become agricultural crop pests.”

The study focussed on insects flying more than 150 metres above the ground, using radar for larger insects (10mg and over) and netting samples for smaller ones.

Cost Of Natural Disasters Since 1900 Estimated At $7 Trillion And...