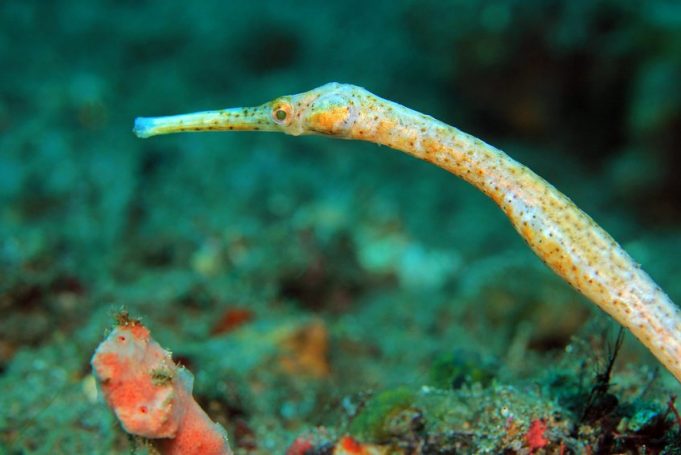 In the upside-down world of the pipefish, sexual selection appears to work in reverse, with flashy females battling for males who bear the pregnancy and carry their young to term in their brood pouch. But new research shows even more factors appear to play a role in determining mating success.

For most species, males compete for access to females — think, a peacock’s tail or a buck’s antlers. But in some species, the sex roles are reversed and males carry the brood, as in the case of pipefish and other members of the Syngnathus family like the seahorse.

In these cases, females must compete for access to available mates, and indeed, researchers have found secondary sex traits, such as brightly colored ornamentation, evolving in female pipefish instead of males. Previous studies have also found that large female pipefish, which are able to transfer more eggs to the male’s pouch, are more attractive to the males.

But, in new study published in the journal Behavioral Ecology and Sociobiology, researchers found that the size of male pipefish matters too.

A team of researchers in the United States and Sweden sampled a population of broad-nosed pipefish (Syngnathus typhle) at the beginning of the breeding season in shallow eelgrass beds in Kyllaj, Gotland, Sweden. They found that larger males bred first and their offspring had a better chance of surviving.

The study suggests that larger males have a clear reproductive advantage in the wild over the smaller males. And timing is important too if they breed earlier, they increase their chances of being able to have more pregnancies before the end of the breeding season.

“From a research standpoint, pipefish are interesting because of the unique opportunity they provide to study sexual selection in reverse, which can tell us a lot about how variation works in mating and reproductive success,” said lead author Sarah Flanagan, a postdoctoral fellow at the National Institute for Mathematical and Biological Synthesis.

“This study shows that there are many factors at play in this system, more than perhaps we ever realized, but it’s that variation in traits and fitness which allows for sexual selection to work,” Flanagan said.

At NIMBioS, Flanagan is extending the research by exploring the role that genetics plays in complex systems in species like pipefish.

Dressing up like a peacock: Bright colors by nanotechnology