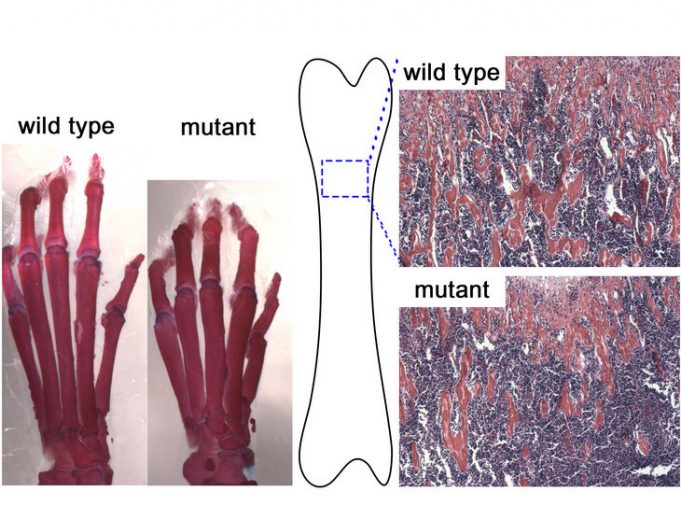 Loss of a key protein leads to defects in skeletal development including reduced bone density and a shortening of the fingers and toes a condition known as brachydactyly.

The discovery was made by researchers at Penn State University who knocked out the Speckle-type POZ Protein (Spop) in the mouse and characterized the impact on bone development. The research, redefines the role of Spop during bone development and provides a new potential target for the diagnosis and treatment of bone diseases such as osteoporosis.

“The Spop protein is involved in Hedgehog signaling a well-studied cell-to-cell communication pathway that plays multiple roles during development,” said Aimin Liu, associate professor of biology at Penn State and the corresponding author of the study.

“Previous studies done in cell culture suggested that Spop negatively regulates or ‘turns down’ Hedgehog signaling. However, in our study, we show that Spop positively regulates the pathway downstream of a member of the Hedgehog family, a protein called Indian Hedgehog, during bone development. This new understanding adds to our knowledge of the genetic basis of bone development and could open new avenues to study bone disease.”

Indian Hedgehog (Ihh) plays an essential role in bone development. It is near the top of a hierarchical cascade of genes that program cells to produce cartilage and bone. Ihh controls gene expression by regulating the activity of the transcription factors proteins that control the expression of other genes Gli2 and Gli3. Gli2 acts mainly as an activator of gene expression and Gli3 acts mainly to repress gene expression. The Spop protein tags the Gli proteins to be degraded in the cell.

“Previous studies led to a hypothesis that a loss of Spop function would increase Hedgehog signaling because the Gli activators were no longer being degraded,” said Hongchen Cai, a graduate student at Penn State and an author of the paper.

In order to study the role of Spop in bone development more closely, the researchers knocked the gene out specifically in the limb. Limbs that lacked Spop had less dense bone, mimicking osteopenia a human condition characterized by low bone density, but not as severe as osteoporosis. The limbs also had shorter than normal fingers and toes.

The researchers also showed that the effects of losing Spop could be mitigated by simultaneously reducing the amount of Gli3 in the limbs.

Twelve DNA areas ‘linked with the age at which we have...