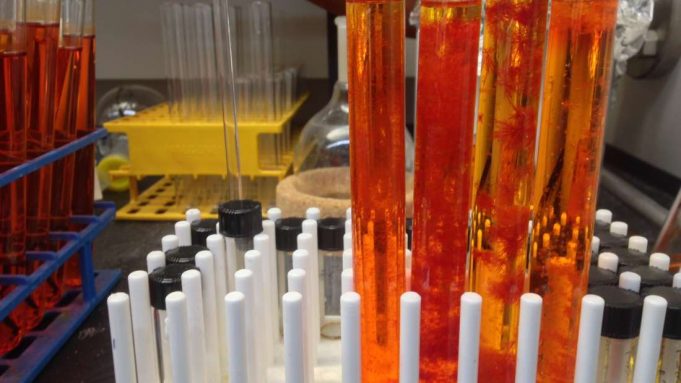 When certain bacteria are fed a carefully designed molecule with iron at its heart, electricity is produced, which can be harvested using electrodes. The response is seen in a species used to process wastewater, so this could form a new way to produce a handy, although not world-changing, amount of renewable energy.Some bacteria, known as electrogenic species, produce electricity in the course of processing their food. This includes the version found in the wild of an anaerobic bacterium known as Shewanella oneidensis MR-1. Although it would be possible to generate electricity from S. oneidensis, it’s not widespread enough to be really useful. Some work has been done on transferring the appropriate genes to more common species, but a paper in Chem presents an option that may work better.

If you put S. oneidensis in lactate and water, it will create a chemical reaction that produces acetate, HCO3, hydrogen ions, and 4 electrons. When this happens near an electrode surface, the electrons can be tapped to make a current.

Zach Rengert, a graduate student at University of California Santa Barbara, looked at previous research showing that certain chemicals enhance this behavior and went looking for something that does it better. DFSO+ (full chemical name E,E-1,10-bis(2-(3,5-bis((6-N,N,N-trimethy-ammoniumhexanyl)oxy)phenyl)ethenyl)ferrocene tetraiodide if you must know) has a suitable molecular shape and iron at its core to conduct charge.

Rengert added DFSO+ to tubs of ordinary S. oneidensis and to two populations where the genes for electricity production had been knocked out. He found that even for the modified strains, which barely produce electricity on their own, the DFSO+ acted as a pathway from the inside of the S. oneidensis cells to the electrodes, although production was still much lower than for the wild variety.

The fact that the DFSO+ increased the electricity output of the variety of S. oneidensis that produces electricity anyway is useful, but of more potential significance is the discovery that even bacteria that can’t generate electric currents under normal conditions can do so with DFSO+. If this applies to other bacteria, whose wild varieties are not electricity producers, it could become a boon to treatment plants worldwide.

“The concept here is that if we just close the lid of the wastewater treatment tank and then give the bacteria an electrode, they can produce electricity while cleaning the water,” said Rengert in a statement. “And the amount of electricity they produce will never power anything very big, but it can offset the cost of cleaning water.”

Moreover, all three strains of S. oneidensis in the trial processed lactate faster when DSFO+ was added, almost doubling for the wild strain, suggesting the addition of DFSO+ could be beneficial even without the power.