India gradually drifted away from Africa and Madagascar towards the north and collided with the Eurasian plate. Scientists assumed for a long time that the subcontinent was largely isolated during its long journey through the ocean and unique species of plants and animals were therefore able to develop on it.
However, paleontologists at the University of Bonn are now showing using tiny midges encased in amber that there must have been a connection between the apparently cut off India and Europe and Asia around 54 million years ago that enabled the creatures to move around. The surprising results are now presented in the journal PLOS ONE.

India harbours many unique species of flora and fauna that only occur in this form on the subcontinent. The prerequisite for such a unique development of species is that no exchange takes place with other regions. For a long time, scientists assumed that India was isolated in this way due to continental drift.

The supercontinent Gondwana, which included South America, Africa, Antarctica, Australia, Madagascar and India, broke up over the course of geological history. What is now India also began moving towards the north east around 130 million years ago. It was common belief among researchers that, before it collided with the Eurasian plate, India was largely isolated for at least 30 million years during its migration.

However, according to current findings by paleontologists at the University of Bonn, the Indian subcontinent may not have been as isolated on its journey as we have thought.

“Certain midges that occurred in India at this time display great similarity to examples of a similar age from Europe and Asia,” says lead author Frauke Stebner from the working group of Prof. Jes Rust at the Steinmann Institute at the University of Bonn. These findings are a strong indicator that an exchange did occur between the supposedly isolated India, Europe and Asia.

Mining for amber in the Indian coal seams

The scientist from the University of Bonn mined for amber in seams of coal near the Indian city of Surat. Small midges, among other things, were encased in tree resin 54 million years ago and preserved as fossils. The tiny insects, which are often not even a millimeter large, are “biting midges.” Their descendants can still be found today in Germany in meadows and forests where the little beasts attack you in swarms and suck your blood.

The paleontologist investigated a total of 38 biting midges encased in amber and compared them with examples of a similar age from Europe and China.

Scientists from the University of Gda?sk (Poland) and Lucknow (India) were also involved in this. It has been possible to assign a total of 34 of these insect fossils to genera that are already known. “There was significant conformity with biting midges in amber from the Baltic and Fushun in north-east China,” reports Stebner.

Chains of islands presumably created a link to India

How the insects were able to spread between drifting India and Eurasia has not yet been clarified fully. “Nevertheless, it also seems to have been possible for birds and various groups of mammals to cross the ocean between Europe and India at the time,” the paleontologist refers to studies by other scientists. However, it has now been possible for the first time, with the aid of biting midge fossils, to also demonstrate an exchange between India and Asia in this period.

Stebner assumes that a chain of islands that existed at that time between India, Europe and Asia could have helped the biting midges to spread. As if from stepping stone to stepping stone, the insects could have gradually moved forward along the islands.

“Some of the biting midges found in Indian amber were presumably not especially good long-distance flyers,” smiles the paleontologist from the University of Bonn. It was therefore probably not so easy to reach the subcontinent or move from there during the migration of India. 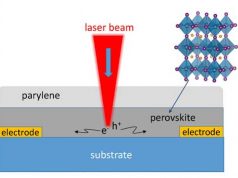