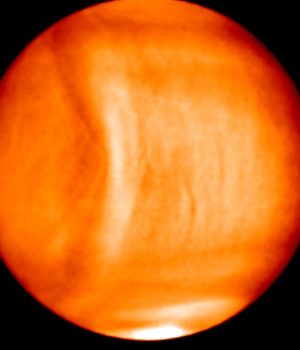 A Japanese spacecraft that is circling Venus has beamed home pictures of one of the largest waves ever seen in the solar system.

The Akatsuki probe captured images of the giant wave in the Venusian cloud tops where it became one of the most prominent features in the planet’s atmosphere for four days in December 2015.

Cameras onboard the spacecraft recorded the pressure wave in the atmosphere stretching over 10,000km (6,214 miles) from the northern polar region across the equator to the planet’s southern pole.

Scientists at the Japanese space agency believe that surface winds produced the massive stationary wave on Venus when they slammed into the 4,500-metre-high (14,764 feet) Aphrodite Terra mountain range near the planet’s equator.

“Such stationary waves can have a very large scale, perhaps the greatest ever observed in the solar system,” the researchers write in the journal Nature Geoscience. The unusual waves may even be powerful enough to affect the climate on the planet, the scientists add.

The Akatsuki spacecraft used infrared and ultraviolet cameras to capture images of the enormous wave 65km (40 miles) above the ground in the thick sulphuric acid clouds that shroud the planet. The centre of the wave was directly above the western slope of the Aphrodite Terra highlands.

On Venus, clouds sweep by at 350km per hour (217 miles per hour), which is much faster than the speed at which the planet rotates beneath. The planet spins so slowly that a day on Venus lasts longer than a year there.

The Japanese spacecraft swung into orbit around Venus in December 2015 and snapped pictures of the wave until the observations were cut short to allow mission controllers to work on the spacecraft’s trajectory and communications.

The entire observable universe in one picture