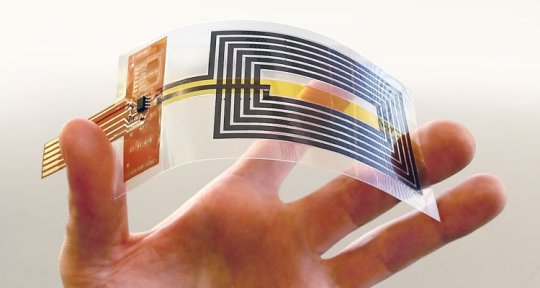 Graphene is currently one of the most extensively studied materials in the world, both on a scientific and industrial level. The world’s first two-dimensional material, this single layer of carbon atoms arranged in a hexagonal lattice has a series of unique and outstanding properties.
As well as being the thinnest, strongest and lightest known material, graphene is flexible, impermeable and extremely electrically and thermally conductive. All properties well suited for next generation NFC antennas.

Near-field communication (NFC) is a set of communication protocols that enables two electronic devices to transfer data. The most distinctive characteristic of NFC is the fact that it can transmit small amounts of data wireless only within a close range while other methods, such as Bluetooth and Wi-Fi, have a wide transmit range of up to 10 or even 100m.

The reason why NFC technology is used to identify objects is that, with such a close transmitting range, it is more secure and less vulnerable to data hijacking. Application areas are tracking and managing inventories, assets, people, animals, contactless payment systems, security cards and social networking.

The Graphene Flagship Italian partner CNR-ISOF’s research shows that it is possible to use graphene to produce fully flexible NFC antennas. By combining material characterization, computer modelling and engineering of the device, the Graphene Flagship researchers designed an antenna that could exchange information with near-field communication devices such as a mobile phone, matching the performance of conventional metallic antennas.

The graphene-based NFC antennas are chemically inert, highly resistant to thousands of bending cycles and can be deposited on different standard polymeric substrates or silk tissues.

Vincenzo Palermo, Graphene Flagship leader of the Polymer Composites research area and group leader of the Nano-Chemistry laboratory in the Institute for Organic Synthesis and Photoreactivity of National Research Council (CNR) says: “A key target for modern technology is to replace metals with lighter, cheaper, less energy-consuming and better recyclable materials. Due to its unique combination of superior properties, graphene can be used to produce fully flexible NFC antennas.”

“The possibility to produce fully flexible graphene based NFC antennas showcases future applications such as wearable NFC tags interacting with smartphones and other devices. We have developed a NFC antenna with different graphene derivatives. Several designs, materials and configurations were studied and tested.

The graphene antennas was laminated on different substrates like PET, PVC, Kapton, furthermore a silk/graphene paper wearable antenna was prepared. This technology could be developed further within the field of flexible electronics and communication technology.”

The fully flexible graphene NFC device demonstrators were tested with a smartphone through the NFC reader App by the Graphene Flagship partner STMicroelectronics, showing good functionality whether flat or fixed on curved objects.

“We demonstrate that, if this approach is performed in the right way, the graphene antennas can be used directly in working devices, with no additional tuning of, for example, software or hardware of the interacting devices. Finally, some fully working graphene smart cards were prepared in order to be used as electronic keys, business cards and other typical NFC applications. We are exhibiting at the Composite Europe 2016 to find new industrial collaboration partners to develop the graphene based NFC antennas into large scale production,” says Vincenzo Palermo.

Solar panels that generate energy when it rains