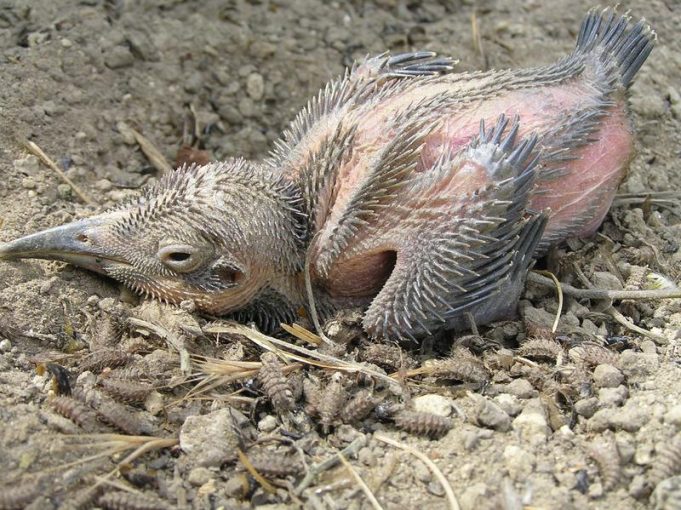 Bird nests are home not only to the bird parents and their offspring but also to other inhabitants, such as insect larvae, which take advantage of the favorable climatic conditions and abundant supply of food in the nests. So far, there has been no research into the possible benefit for birds from this living arrangement. A team of researchers from Vetmeduni Vienna has now shown that fly larvae in nests of European bee-eaters help clean the nest by foraging on feces and uneaten food.

This “waste removal” has a positive effect on offspring development and benefits the nest ecosystem. The study was published in the Journal of Ornithology.

Birds share their nests with a rich community of other inhabitants like parasites and mainly invertebrates, such as insects, that are attracted to the nest because of the stable climatic conditions for their larvae as well as the rich supply of food. With the exception of parasites, no study to date has examined the role of insects in this community. As they use feces and food remains as a source of food, their presence could have a positive effect on the development of nestlings among birds like the European bee-eater (Merops apiaster), which completely lack any nest sanitation behaviour.

Nest sanitation not a must for the bee-eater

The richly coloured bee-eaters practice absolutely no nest sanitation. The birds dig small nesting tunnels in steep banks or cliffs with a nest chamber at the end. From egg-laying to fledging of the offspring, a considerable amount of food remains, feces and skin particles accumulate on the chamber floor. The birds do not remove these residues themselves, which could threaten the health of the offspring, the so-called nestlings.

“Faces and food remains may stimulate the production of gases that change the composition of the air in the nesting cave. This could result in an increased risk of illness and weaker young,” explains study director Herbert Hoi from the Vetmeduni Vienna’s Konrad Lorenz Institute of Ethology. Using Fannia spp. fly larvae, he examined whether the waste-foraging co-inhabitants of bee-eater nests contribute to nest sanitation with a positive effect on nestling development.

Fly larvae contribute to nestling development by cleaning the nest

Fannia spp. fly larvae are present in great numbers, undetected by the birds, on the floor of the bee-eater’s nest chamber. For their experiment, Hoi and his team added additional larvae to the nesting cave of one group of European bee-eaters and reduced the number of larvae in another. Two further groups served as control groups for how nestlings develop without any change in larvae numbers.

Soil samples were taken from the floor of the nests and the nestlings were examined at regular intervals and at the end of the experiment. The team documented important developmental indicators such as weight and size, searched for signs of inflammation and compared the oxygen saturation of the blood.

The analysis of these parameters confirmed a positive effect from the presence of the “waste removers.” The presence of more fly larvae correlated to heavier and larger nestlings in comparison to the control groups.

A lower number of larvae in the nest had a negative effect on nestling development. These were comparatively smaller and weighed less than all other nestlings. The oxygen saturation and inflammation values were nearly the same for all groups.

Bird nests a good example of a functioning ecosystem

The experiment with the fly larvae clearly showed that at least some nest inhabitants represent a benefit for the birds. Birds like the bee-eater, which lack any sanitation behaviour, benefit from the presence of insect larvae that clean the nest well enough to allow the offspring to develop normally.

Hoi sees the positive role of the fly larvae as an example of a functioning community among the inhabitants of bird nests. “Many birds do not practice nest sanitation behaviour. This may also have to do with the fact that they do not want to call the attention of predators to the nest through the presence of waste,” the researcher explains. “But if the insect larvae didn’t take care of the waste, this would be a great disadvantage for the health of the nestlings.”

More than 100 animal species have been found living in the nests of bee-eaters. Hoi wants to use such nest communities for future research. “They present a perfect model for small ecosystems.”

What happens to your body when you stop eating