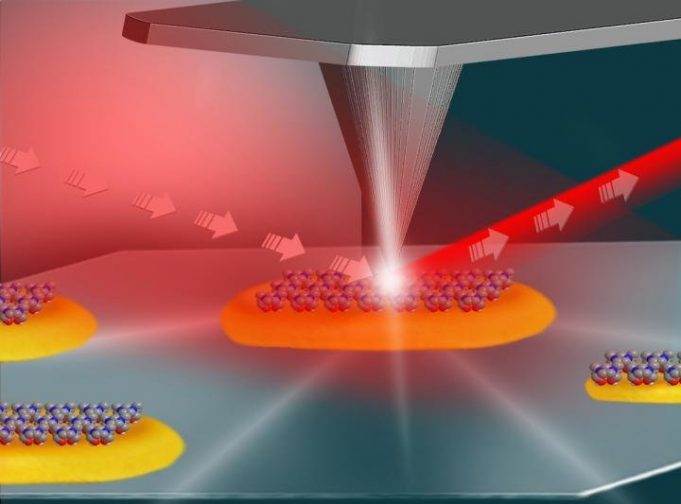 Using one of the world’s brightest light sources to peer inside some of the world’s smallest particles, scientists have confirmed a longstanding hypothesis: that atomic disorder or “defects” at the edges of nanoparticles is what makes them effective as chemical change agents.

The process by which a change agent, or catalyst, accelerates a chemical reaction is key to the creation of many materials essential to daily life, such as plastics, fuels and fertilizers. Known as catalysis, this process is a basic pillar of the chemical industry, making chemical reactions more efficient and less energy-demanding, and reducing or even eliminating the use and generation of hazardous substances.

Although catalysts have been used in industry for more than a century, scientists have yet to observe how their structure impacts their effectiveness as change agents. That’s because catalysts are typically tiny metallic nanoparticles made of precious metals such as Platinum, Palladium or Rhenium. The extreme smallness that makes nanoparticles such effective catalysts also makes it hard to see how they work.

If scientists could peer inside individual nanoparticles’ chemical reactions at a nanoscopic level, they would gather a treasure of useful knowledge for the design of improved catalysts to address the pressing energy needs of the 21st century.

That type of knowledge may now be close at hand, thanks to new research published January 11 in the journal Nature. In the new study led by Dr. Elad Gross from the Institute of Chemistry and the Center for Nanoscience and Nanotechnology at the Hebrew University of Jerusalem, and Prof. F. Dean Toste from the College of Chemistry at University of California, Berkeley, and Chemical Science Division at Lawrence Berkeley National Laboratory researchers directly observed for the first time how metallic nanoparticles, used as catalysts in numerous industrial processes, activate catalytic processes.

The different reactivity observed at the center and edges of Platinum particles corresponds to the different properties of the Platinum atoms in the two locations. The atoms are mostly flat at the center, while they’re corrugated and less-ordered at the edges.

The research findings validate a well-known hypothesis in the world of catalysis, which correlates high catalytic reactivity with high density of atomic defects. It also shows, for the first time, that the enhanced reactivity of defected sites can be identified at the single-particle level.

“Our findings provide insights about the ways by which the atomic structure of catalysts controls their reactivity. This knowledge can direct the design of improved catalysts that will make chemical process greener, by decreasing the amount of energy that is consumed in the process and preventing the formation of unwanted, potentially hazardous, products,” said Dr. Elad Gross, from the Institute of Chemistry and the Center for Nanoscience and Nanotechnology at the Hebrew University of Jerusalem.

To peer into individual nanoparticles, researchers focused a bright infrared beam generated in a synchrotron source (Advanced Light Source, Lawrence Berkeley National Laboratory) into a thin probe with an apex diameter of 20 nanometers.

The probe acts as an antenna, localizes the infra-red light in a specific range, and by that provides the capabilities to identify molecules which reside on the surface of the catalytic nanoparticles. By scanning the particles with the nanometric probe while it is being radiated by the infrared light, the researchers were able to identify the locations and conditions in which chemical reaction occurs on the surface of single particle.

The Hebrew University of Jerusalem is Israel’s leading academic and research institution, producing one-third of all civilian research in Israel. For more information, visit http://new.huji.ac.il/en.

Nanorockets now available with brakes and a steering wheel