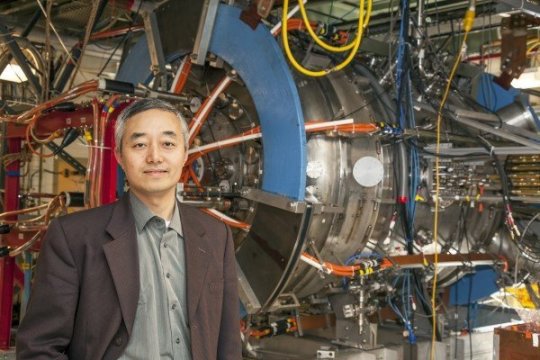 Physicists at the U.S. Department of Energy’s (DOE) Princeton Plasma Physics Laboratory (PPPL) have for the first time directly observed a phenomenon that had previously only been hypothesized to exist.
The phenomenon, plasmoid instabilities that occur during collisional magnetic reconnection, had until this year only been observed indirectly using remote-sensing technology. In a paper published in the August 2016 issue of Physical Review Letters, PPPL physicists report that they created the phenomenon in a laboratory setting where they could measure it directly and confirm its existence on the electron scale, which describes the range of motion of electrons and how quickly they move.

This research was funded both by the DOE’s Office of Science and NASA’s Heliophysics Division.

The magnetic bubbles then cause fast magnetic reconnection, when a plasma’s magnetic field lines break apart and join together again, releasing large amounts of energy. Before now, physicists at NASA and other institutions had only been able to directly confirm the existence of these instabilities in collisionless plasmas, like those surrounding Earth in the upper atmosphere, in which the plasma particles do not collide often.

Scientists had not been able to confirm the existence of plasmoid instabilities in collisional plasmas, in which the particles frequently collide, because such plasmas occur in outer space, far from Earth. Collisional plasmas like those on the surfaces of stars are so far away that scientists have difficulty measuring them directly. But physicists at the Massachusetts Institute of Technology and elsewhere had predicted their existence years ago.

Scientists have obtained, however, indirect evidence of plasmoid instabilities in outer space. Using telescopes and spectroscopes, as well as fusion facilities like PPPL’s former flagship device known as the National Spherical Torus Experiment (NSTX), which has since been upgraded, scientists took photographs and analyzed light that hinted at the existence of the instabilities. But without direct measurements, they were unable to confirm that the instabilities existed.

“These findings are significant because data gathered in past magnetic reconnection experiments involving collisionless plasma does not apply to the large, collisional plasmas found throughout space,” said Hantao Ji, a professor at Princeton University’s Department of Astrophysical Sciences, distinguished fellow at PPPL, and co-author of the paper.

“Scientists have long had difficulty studying these plasmas because it’s hard to create the necessary conditions on Earth, and we can’t just stick probes directly into stars. Now we have a glimpse into their workings.”

During the research, lead author and graduate student Jonathan Jara-Almonte and the team used a PPPL device known as the Magnetic Reconnection Experiment (MRX). Unlike in past experiments, Jara-Almonte and his team used a plasma made out of argon atoms, rather than hydrogen, deuterium or helium. Using argon, they found, allowed them to produce conditions for collisional reconnection within the plasma more easily.

Along with confirming the existence of plasmoid instabilities in collisional plasmas undergoing reconnection, the research showed that instabilities can arise even when a plasma does not conduct electricity well, a condition known as having a low Lundquist number that scientists thought would hinder plasmoid development. This was a surprising finding, since scientists have long predicted that plasmoids would form only when a plasma conducts electricity well.

The MRX experiment also confirmed that plasmoids speed up the rate at which reconnection occurs the first time the effect has been observed in a collisional environment. Understanding how fast reconnection occurs is important because it can affect Earth in dramatic ways.

When reconnection happens on the surface of the sun, enormous blobs of plasma shoot into space and can collide with Earth’s magnetic field, creating geomagnetic storms that threaten communication satellites and electricity grids.

Capturing the energy of slow motion

Wind turbines may have beneficial effects for crops, research suggests

Scientists have turned cooking oil into a material 200 times stronger...