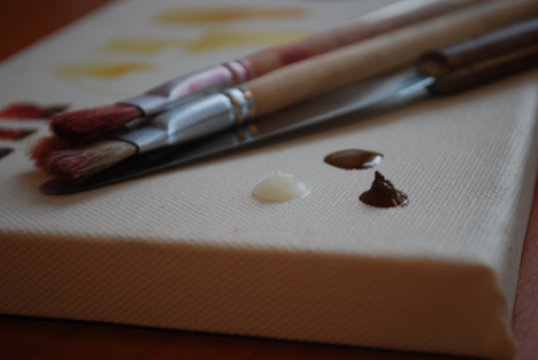 To paint quickly while creating exceptional texture and volume effects, J. M. W. Turner and other English artists of his generation relied on the development of innovative gels. All the rage in the 19th century and still in use today these compounds alter the properties of the oil paints they are combined with. CNRS, UPMC, and Collège de France researchers have finally learned the chemical secrets behind these mixtures.
Lead in its acetate form is essential for the formation of the gels. The team’s findings are published in the 9 January 2017 issue of Angewandte Chemie International Edition.

Oil paints were traditionally made by grinding pigments together with linseed, walnut, or poppy seed oil. When prepared in this way, oil paints have very long drying times. Completing a painting takes months, or even years if several layers of color are to be applied.

In the 19th century, artists like J. M. W. Turner introduced innovations in oil painting that shortened drying time and allowed them to add further dimensions of light and movement through the creative use of novel properties. Aided by chemists, they combined materials to obtain new formulations that met their requirements: oil-resin gels containing lead most often lead acetate, in aqueous solution or solid form.

These ‘gumtions’, as they were called by the English painters using them, made it possible to finish a painting faster in just days while incorporating unrivaled volume and texture effects.

How exactly do these materials assume their form? How do they bind with paint? How do they age? Answering such questions, and consequently making appropriate recommendations for conservation, requires an understanding of the structural, chemical, and other properties of these gels. After reconstituting the original paint formulas of the 19th century, the researchers were able to reproduce the gels and study their rheological properties i.e. flow and deformation behavior.

The addition of even minute amounts of the gels to pigments is enough to modify paint characteristics, yielding elastic properties superior to those of traditional oil paint. They are bona fide paint mediums! Furthermore, oil isn’t even necessary to create a gel. Mastic resin and lead acetate are all that is needed.

The researchers combined several spectroscopic techniques to explore the gels on multiple scales. They managed to define the molecular interactions of the hybrid organic-inorganic gel system and the mechanisms of gelling. The team uncovered processes similar to those behind the drying and aging of oils.

Lead is known to accelerate these processes, which explains the formation of the gel. These findings show that lead not only catalyzes the gelling process but contributes to the structure of the medium.

The findings of thesis research begun in November are expected to elucidate the chemistry of these hybrid gels. The challenge is to determine how the lead binds with the resin, the conditions for conservation of these mixtures, and those under which they break down.