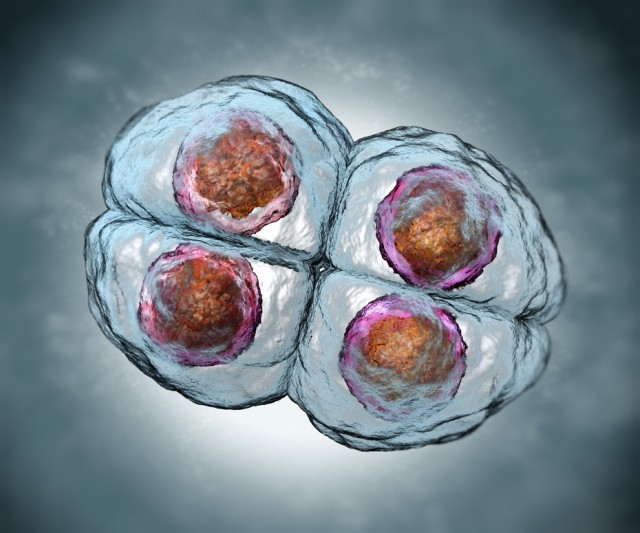 Genetic ‘signatures’ of early-stage embryos confirm that our development begins to take shape as early as the second day after conception, when we are a mere four cells in size, according to new research led by the University of Cambridge and EMBL-EBI.

Although they seem to be identical, the cells of the two day-old embryo are already beginning to display subtle differences.

Once an egg has been fertilised by a sperm, it divides several times, becoming a large free-floating ball of stem cells. At first, these stem cells are ‘totipotent’, the state at which a stem cell can divide and grow and produce everything every single cell of the whole body and the placenta, to attach the embryo to the mother’s womb.

The stem cells then change to a ‘pluripotent’ state, in which their development is restricted to generating the cells of the whole body, but not the placenta. However, the point during development at which cells begin to show a preference for becoming a specific cell type is unclear.

Now, in a study published in the journal Cell, scientists at the University of Cambridge and the European Bioinformatics Institute (EMBL-EBI) suggests that as early as the four-cell embryo stage, the cells are indeed different.

The researchers used the latest sequencing technologies to model embryo development in mice, looking at the activity of individual genes at a single cell level. They showed that some genes in each of the four cells behaved differently.

The activity of one gene in particular, Sox21, differed the most between cells; this gene forms part of the ‘pluripotency network’. The team found when this gene’s activity was reduced, the activity of a master regulator that directs cells to develop into the placenta increased.

“We know that life starts when a sperm fertilises an egg, but we’re interested in when the important decisions that determine our future development occur,” says Professor Magdalena Zernicka-Goetz from the Department of Physiology, Development and Neuroscience at the University of Cambridge.

“We now know that even as early as the four-stage embryo – just two days after fertilisation – the embryo is being guided in a particular direction and its cells are no longer identical.”

“We can make use of powerful sequencing tools to deepen our understanding of the molecular mechanisms that drive development in individual cells.

Because of these high-resolution techniques, we are now able to see the genetic and epigenetic signatures that indicate the direction in which early embryonic cells will tend to travel.”

Dental implants with antibacterial activity and designed to facilitate integration into...