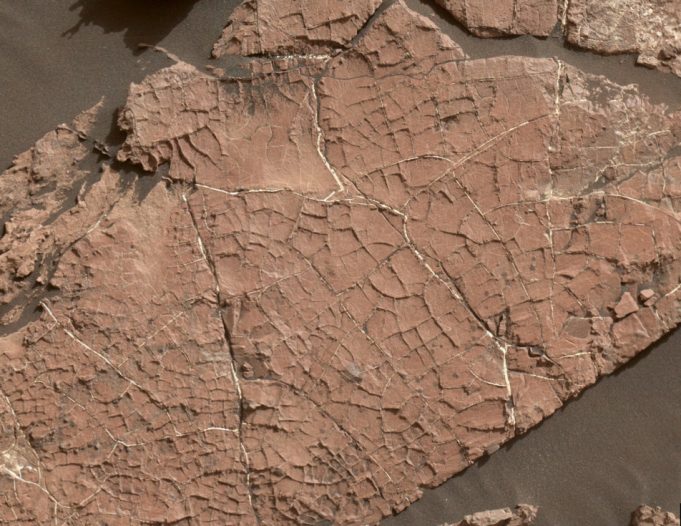 New images from NASA’s Curiosity rover on Mars reveal what looks to be the first sign of mud cracks on the Martian surface, providing scientists with even more evidence that the red planet once hosted water – which potentially could have supported life.

If the space agency’s hunch is correct, these rock formations were once mud cracks (also known as desiccation cracks) – an ancient relic of Mars’s wetter past billions of years ago. When the soil dried out, it was preserved under layers of rock in a fractured, segmented state, like a time capsule for Curiosity to discover eons later.

Curiosity came across the formations in the foothills of Mount Sharp, at a site nicknamed ‘Old Soaker’, after scientists noticed distinctive patterns in the Martian soil that didn’t resemble anything they’d observed before – at least, not on Mars.

“Even from a distance, we could see a pattern of four- and five-sided polygons that don’t look like fractures we’ve seen previously with Curiosity,” says Curiosity researcher Nathan Stein from Caltech.

“It looks like what you’d see beside the road where muddy ground has dried and cracked.”

The researchers think the mud layer took shape more than 3 billion years ago, after Mars’s once bountiful ancient lakes dried up.

The cracks then became buried over time by layers of surface sediment, which hardened into stratified rock, before wind erosion once more revealed the fractured patterns we see today.

According to the team, as the formations were buried with sediment, the crack rivets became filled with material that better resisted the wind erosion than the mudstone around it, which is why the cracks now appear as raised ridges.In mud drying on the surface, this crack-filling sediment would have been made up of windblown dust or sand. But once the layer became buried, fractures could have been filled with minerals circulated by Martian groundwater – which scientists recently detected evidence of.

Curiosity’s analysis of Old Soaker reveals that the site contains signs of both kinds of crack sediment, which means we could be looking at a historical cycle of lake activity – as Mars’s bodies of waters ebbed and flowed over billions of years.

“If these are indeed mud cracks, they fit well with the context of what we’re seeing in the section of Mount Sharp Curiosity has been climbing for many months,” says Curiosity Project Scientist Ashwin Vasavada from NASA’s Jet Propulsion Laboratory.

“The ancient lakes varied in depth and extent over time, and sometimes disappeared. We’re seeing more evidence of dry intervals between what had been mostly a record of long-lived lakes.”

Curiosity landed on Mars in August 2012, not far from Mount Sharp, where it has explored the Martian terrain for almost 4.5 years.

The rover has now moved on from Old Soaker towards a rock-drilling location further uphill, but there are fears at NASA that Curiosity’s instruments are showing signs of wear and tear.Curiosity’s drill experienced technical problems last month, so scientists are being cautious with its fieldwork while they figure out exactly how serious the problem is.

Let’s hope NASA can fix whatever it is, because while we’ve found out so much in recent years about the existence of water in the red planet’s past, we still haven’t found signs of any microbial life that it could have supported.

Nor do we fully understand how and why conditions on Mars changed to turn it into the drier and potentially lifeless world it may be today – although of course we’re always following every lead that could point to Martian organisms.

Curiosity’s our best shot at getting those answers on the ground, so there’s an awful lot riding on the continued success of this mission.

Measuring a black hole 660 million times as massive as our...