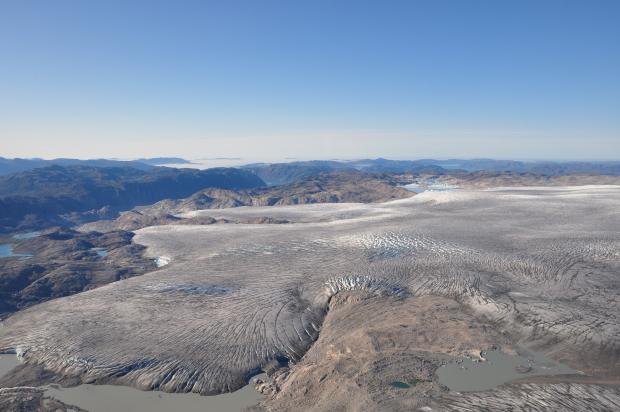 Climate scientists are worried about a series of large but brief ice melt events that have occurred in Greenland since 2010. The two most recent events took place in 2012 when almost 15 per cent of all ice melt that year occurred in just 6 days.

“The most commonly used climate models don’t do a very good job of capturing these melt events. They’re just so energetic and extreme,” says lead-author Robert Fausto from the Geological Survey of Denmark and Greenland.

“The implication is that we’ll underestimate the importance of events like this to ice melt in Greenland, and it will add up over time,” says Fausto.

The new study, which is published in the journal Geophysical Research Letters, could help other scientists to improve predictions of future ice melt in Greenland.

A high pressure sat off the east coast of Greenland while low pressure systems formed off the west coast. Together they forced warm, wet air up along the coast and onto the ice sheet and created the ideal conditions for ice melt along the entire western edge of the ice sheet.

This warm, wet weather brought with it large quantities of non-radiative energy, which is energy that comes from a number of sources within the atmosphere, such as sensible and latent heat carried by warm wet air.

By studying data from weather stations located around the ice sheet, Fausto and his team saw that it was the heat from this non-radiative energy that caused most of the rapid ice melt during these events.

“You may not think that rainy and cloudy weather would drive ice melt in Greenland, but they’re actually very important conditions for these melt events. Rain has a lot of heat in it,”

The scientists then looked at how well climate models captured changes in this non-radiative energy over Greenland during these events. The news was not good.

“The models are not very good at capturing these melt events as they underestimate the importance of this type of energy,” says Fausto.

Climate models will underestimate future melt
As the Earth warms due to climate change we can expect to see more of these types of events, says Fausto, adding that climate models clearly under-predict the contribution of these extreme events to ice melt in Greenland.

“All of these energy fluxes are poorly described in the Arctic in general. It would surprise me if Greenland is an exception,” he says, and adds that the entire Arctic region from Alaska to Siberia is vulnerable to these extreme events.

“As global temperature goes up, it looks like we’ll get more of these events,” says Tjernström

“I was in the Arctic in 2014 for fieldwork and experienced a similar event in east Siberia, where the temperature at 500 metres above sea level was over 20 degrees centigrade. These events happen, not every year, but they happen.”

Long-term ice melt still biggest threat
Tjernström emphasises that while these extreme events are impressive, they are not the norm and the ice sheet faces a bigger threat.

“Of course more of these events will have an effect. But by and large the big problem is the gradual increase in global temperature,” he says.

Fausto emphasises that this study is not addressing issues of long term melt across the entire ice sheet. Rather, it simply draws attention to a problem with climate models when it comes to predicting the importance of these particularly extreme events.

“If our models on average underestimate melt significantly during these extreme events, we will have a cumulative deficit for our melt projections for Greenland,” says Fausto.