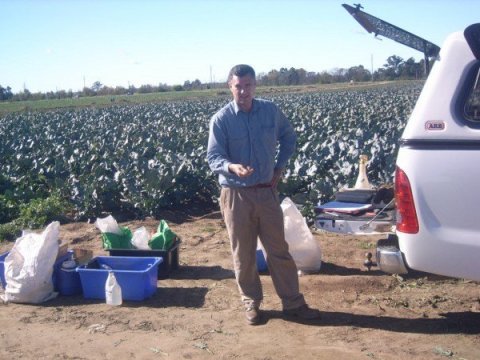 The hottest months. The snowiest winters. Catastrophic floods and droughts.

Climate change impacts lives across the world in drastic and unpredictable ways. This unpredictability also extends to the more subtle yet still important effects of climate change.

For example, it is uncertain how climate change will affect soils and their ability to support productive farms or healthy natural ecosystems.

In a new study, researchers used digital techniques to predict how one vital soil characteristic, soil organic carbon, may be altered by climate change.

“Soil organic carbon is a major determinant of soil health,” says Jonathan Gray, lead author of the study. “It influences many chemical, physical, and biological properties of the soil, such as fertility and water holding capacity.”

Gray is a senior scientist at New South Wales Office of Environment & Heritage in Australia and also undertaking doctoral studies at the University of Sydney.

The researchers used 12 climate change models to predict how soil organic carbon levels vary with climate change. The models used in the study reflected a full range of projected global climate outcomes. They were also applicable to the specific study region of New South Wales in southeast Australia.

Results were varied. “A majority of models showed a decline in soil organic carbon with climate change,” states Gray. “But a few of the models actually predicted an increase.”

Why the different predictions? Gray attributes it to uncertainties within the climate change models. “We need more consistency between climate change projections before we can confidently predict how soil organic carbon levels will behave,” he says.

The researchers also discovered that the extent to which soil organic carbon changes varied across soil types, current climate, and land use regimes. For example, the projected average decline of soil organic carbon was less than one ton per hectare for sandy, low-fertility soils in dry conditions under cropping regimes. It was 15 times as much for clay-rich, fertile soils in wet conditions under native vegetation regimes.

“This knowledge can help us to better understand and predict where the greatest potential losses or gains in soil carbon may occur,” says Gray.

Predicting soil organic carbon changes is vital. “It would allow us to better prepare for and adapt to altered soil conditions,” he says. “That would ultimately improve how we manage both agricultural and native ecosystems.”

Gray and his colleagues combined different digital methods to achieve very high resolution mapping. Instead of the typical 10 km resolution, the team achieved resolution of 100 meters. This allowed the researchers to link soil organic carbon changes with specific soil types or land use patterns.

“Our model offered a more conceptually simple, but still robust, alternative to the more complex dynamic modelling approaches that are usually used,” explains Gray. While this study focused on New South Wales, Gray thinks the findings will apply to areas beyond the study site as well. “The actual map of expected soil organic carbon change is of most relevance to New South Wales,” he says. “But the key findings of the study are globally applicable.”

Gray is now trying to predict how other key soil properties, such as nutrients and acidity, will be affected by projected climate change. “These variables will also impact our agricultural and native ecosystems,” Gray says.

Freezing in record lows? You may doubt global warming