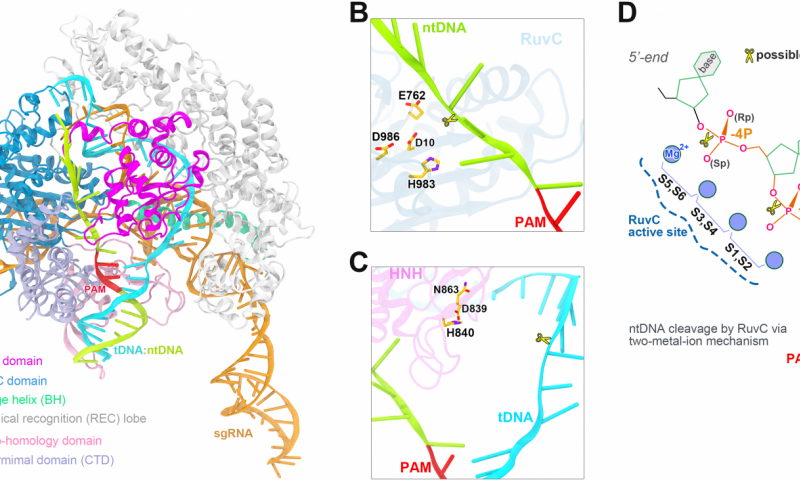 One of the most talked about biological breakthroughs in the past decade was the discovery of the genome editing tool CRISPR/Cas9, which can alter DNA and potentially remove the root causes of many hereditary diseases.

Originally found as part of the immune system of the Streptococcus pyogenes bacteria, CRISPR associated protein 9 (CAS9), in its native state, recognizes foreign DNA sequences and disables them.

In bacteria, the system is used to target foreign viral DNA from bacteriophages DNA that it has already recognized as an enemy through its evolutionary history and has incorporated a record of it into its own DNA.

CRISPR (Clustered regularly interspaced short palindromic repeats, pronounced “crisper”) represent segments of DNA that contain short repetitions of base sequences followed by short segments of “spacer DNA” derived from previous exposures to foreign DNA. The complex consists of proteins that unravel DNA, others that cut the double helix at a specific location, and a guide RNA that can recognize enemy DNA in the cell.

Researchers studying this ancient immune system realized that, by changing the sequence of the guide RNA to match a given target, it could be used to cut not just viral DNA, but any DNA sequence at a precisely chosen location. Furthermore, new sections of DNA could be introduced to join to the newly cut sections.

The method was first conceived and developed by Jennifer Doudna (University of California, Berkeley) and Emmanuelle Charpentier (Umeå University) and has been used in cultured cells including STEM cells and in fertilized eggs to create transgenic animals with targeted mutations that help study genetic functions. CRISPR/Cas9 can affect many genes at once, allowing for the treatment of diseases that involve the interaction of many genes.

The method is improving rapidly and is expected to one day have applications in basic research, drug development, agriculture, and treating human patients with genetic diseases.

However, creating targeted CRISPR/Cas9 mutations is currently expensive and time-consuming, particularly for large-scale studies. The process is also error prone, limiting its widespread use. These problems stem, in part, from a lack of full understanding of how CRISPR/Cas9 works at the molecular level.

In November, a research team from the University of North Texas (UNT) led by Jin Liu used the Maverick supercomputer at the Texas Advanced Computing Center (TACC) to perform the first all-atom molecular dynamics simulations of Cas9-catalyzed DNA cleavage in action.

The simulations, reported in Nature Scientific Reports, shed light on the process of Cas9 genome editing. They also helped resolve controversies about specific aspects of the cutting: such as where precisely the edits occur and whether Cas9 generates blunt-ended or staggered-ended breaks with overhangs in the DNA.

“Right now there are quite a few problems in how we use this in the therapeutic applications. The specificity and efficiency of the enzyme are not high,” Liu said. “It is also difficult to deliver the enzyme to the position of the gene editing. To solve these problems, first, we need to know how this enzyme works. Our research is providing the foundation for the understanding of the mechanism of Cas9.”

Scientists had previously determined the structure of Cas9 in its inactive state through x-ray crystallography, but the gene editing process happens so fast that no experimental technique could capture its state changes and determine exactly how it works.

Using molecular dynamics simulations a method of studying the dynamics of molecules by simulating the interactions of a large numbers of atoms over a fixed time Liu and co-author Zhicheng Zuo, also at UNT, were able to observe the changes in the Cas9 enzyme in femtosecond resolution and capture the transition to the system’s active state.

The simulations Liu and Zuo ran on Maverick encompassed 280,000 interacting atoms. The most challenging part, according to Liu, was effectively sampling conformation spaces to locate the active state.

“We tried our best to enhance the reliability of our simulation results,” Liu said. “We did several long 200 and 300 nanosecond trajectories, and we also did several short trajectories of 60 nanoseconds, to ensure we had consistent results. For each configuration, we performed at least six parallel simulations.”

In addition to studying how the CRISPR/Cas9 complex changes into its active state, the simulations shed a light on where it snipped the DNA.

“Normally people believe it is cut at one position, but there is no clear evidence showing that,” said Liu, assistant professor of Pharmaceutical Sciences at UNT. “Using our computational methods, we determined the cutting occurs at another position, which could mean that this enzyme could cut DNA in a more controllable way. So, by doing this work, we open the door for designing a more efficient enzyme that could cut DNA in a more specific way.”

CRISPR/Cas9 cuts both halves of a double-stranded DNA. If it cuts at the same position on both strands it would generate blunt ends; if it cuts at a slightly different position, it would create staggered ends. Their simulations suggested CRISPR/CAS9 creates staggered ends.

“This will be quite critical for gene editing because staggered-ended DNA is more controllable than the blunt-ended DNA,” she said.

Iok-Hou Pang, chair of Pharmaceutical Sciences at UNT, uses CRISPR/Cas9 to do experimental eye research in his lab. For both his current and future research he sees the value of a clearer understanding of the enzyme’s behavior.

“My lab has been using the CRISPR/Cas9 gene editing system to knockdown a novel protein in cultured mouse optic nerve astroglial cells,” said Pang. “Dr. Liu’s work will help us understand the molecular interaction between the enzyme system and its substrate and will eventually help to improve its efficiency, which is tremendously useful for this wonderful molecular technique.”

In 2015, under the auspices of the National Academies of Science, global scientists declared a moratorium on using CRISPR/Cas9 to edit the human genome in ways that could be inherited (though there are indications that researchers have already broken this injunction). Too little, they said, was known about the process and the long-term effects of doing so. But research like Liu’s could one day play a role in fine-tuning these tools and making them feasible for human use.

“We’re trying to understand the mechanism of the genome editing enzyme that could have great potential toward future pharmaceutical and therapeutic applications and that might get us closer to a position where this technology could be used on human diseases,” Liu said “Without TACC resources this research would be impossible to perform.”

Chimps can tell genetically similar mates from more distant ones