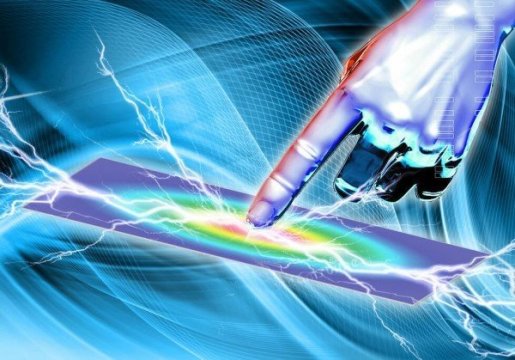 A new concept in energy harvesting could capture energy that is currently mostly wasted due to its characteristic low frequency and use it to power next-generation electronic devices.
In a project funded by electronics giant Samsung, a team of Penn State materials scientists and electrical engineers has designed a mechanical energy transducer based on flexible organic ionic diodes that points toward a new direction in scalable energy harvesting of unused mechanical energy in the environment, including wind, ocean waves and human motion.

Devices to harvest ambient mechanical energy to convert to electricity are widely used to power wearable electronics, biomedical devices and the so-called Internet of Things (IoT) everyday objects that wirelessly connect to the internet.

The most common of these devices, based on the piezoelectric effect, operate most efficiently at high frequency, greater than 10 vibrations per second. But at lower frequencies their performance falls off dramatically.

“Our concept is to specifically design a way to turn low-frequency motion, such as human movement or ocean waves, into electricity,” said Qing Wang, professor of materials science and engineering, Penn State. “That’s why we came up with this organic polymer p-n junction device.”

Called an ionic diode, their device is composed of two nanocomposite electrodes with oppositely charged mobile ions separated by a polycarbonate membrane. The electrodes are a polymeric matrix filled with carbon nanotubes and infused with ionic liquids.

The nanotubes enhance the conductivity and mechanical strength of the electrodes. When a mechanical force is applied, the ions diffuse across the membrane, creating a continuous direct current. At the same time, a built-in potential that opposes ion diffusion is established until equilibrium is reached. The complete cycle operates at a frequency of one-tenth Hertz, or once every 10 seconds.

For smart phones, the mechanical energy involved in touching the screen could be converted into electricity that can be stored in the battery. Other human motion could provide the energy to power a tablet or wearable device.

“Because the device is a polymer, it is both flexible and lightweight,” Wang said. “When incorporated into a next-generation smart phone, we hope to provide 40 percent of the energy required of the battery. With less demand on the battery, the safety issue should be resolved.”

According to the authors on the paper “Flexible Ionic Devices for Low-Frequency Mechanical Energy Harvesting” published online in the journal Advanced Energy Materials, “The peak power density of our device is in general larger than or comparable to those of piezoelectric generators operated at their most efficient frequencies.”

“Right now, at low frequencies, no other device can outperform this one. That’s why I think this concept is exciting,” Wang said.