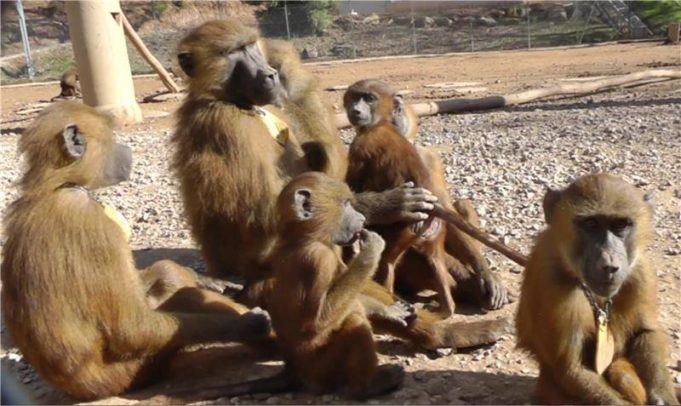 Baboons produce vocalizations comparable to vowels. This is what has been demonstrated by an international team coordinated by researchers from the Gipsa-Lab (CNRS/Grenoble INP/Grenoble Alpes University), the Laboratory of Cognitive Psychology (CNRS/AMU), and the Laboratory of Anatomy at the University of Montpellier, using acoustic analyses of vocalizations coupled with an anatomical study of the tongue muscles and the modeling of the acoustic potential of the vocal tract in monkeys.
Published in PLOS ONE on January 11, 2017, the data confirm that baboons are capable of producing at least five vocalizations with the properties of vowels, in spite of their high larynx, and that they are capable of combining them when they communicate with their partners. The vocalizations of baboons thus point to a system of speech among non-human primates.

Language is a distinctive characteristic of the human species. The question of its origins and how it evolved is one of the most intractable in all science. One of the dominant theories in this field associates the possibility of producing differentiated sounds, the basis of spoken communication, with the “descent of the larynx” observed over the course of the evolution of Homo sapiens.

This theory argues that human speech requires a low larynx (in relation to the cervical vertebrae) and that a high larynx, as found in baboons (Papio papio), prevents the production of a system of vocalizations analogous to the vowel system that exists in all languages.

According to this theory, only humans over the age of one can produce differentiated sounds, whereas babies, Neanderthal man and all species of monkey are incapable of doing so because their larynx is positioned too high.

Researchers from the Gipsa-Lab (CNRS/Grenoble INP/Grenoble Alpes University) had already shown that the high position of the larynx in babies and Neanderthals is not a handicap in terms of producing different vowels. However, it remained to be proved that monkeys, in particular baboons, were indeed capable of producing these types of vocalizations.

The researchers acoustically analyzed the vocalizations of baboons, performed an anatomical study of their tongue muscles, and modeled the acoustic potential of their vocal tract. They thereby discovered that these baboons produce sounds comparable to five human vowels [ɨ æ ɑ o u]. Researchers describe these sounds as “vowel-like” because they share some of the acoustic characteristics of vowels, without having all of their properties.

In addition, they show that the vowel-like sounds [ɑ] and [u] are each used in two distinct vocalizations, produced depending on the situation, and that baboons can also produce a sequence of these two vowel-like sounds with the vocalization “wahoo.” This protosystem combines with vibration frequencies of the vocal folds in a frequency range that is markedly wider than that of speech.

This demonstration of a vocalic protosystem in non-human primates confirms that they can produce different vocalizations, in spite of their high larynx1. Although monkeys do not produce speech sounds, the data suggest evolutionary links between the vocalizations of baboons and human phonological systems. More generally, spoken languages may have evolved from ancient articulatory skills already possessed by our last common ancestor Cercopithecoidae, around 25 million years ago.

1 Other research, published by an American team in Science Advances in December 2016, corroborates these results thanks to articulatory measurements of the vocal tract of monkeys.

Dolphins Are Helping Us Hunt for Aliens