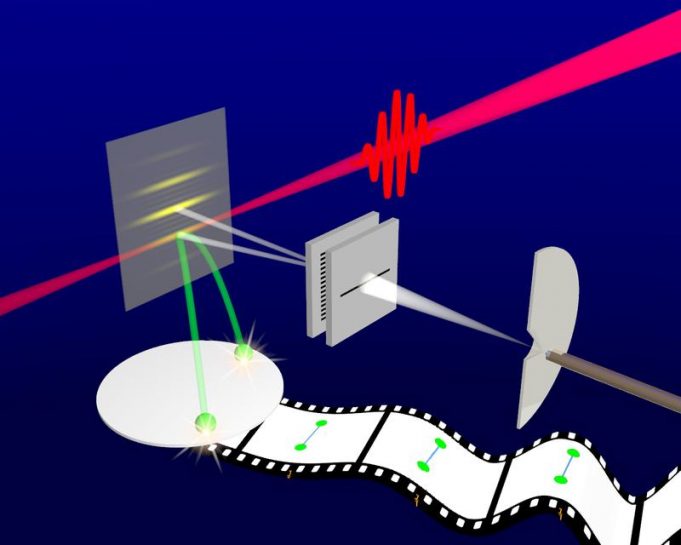 Helium atoms are loners. Only if they are cooled down to an extremely low temperature do they form a very weakly bound molecule. In so doing, they can keep a tremendous distance from each other thanks to the quantum-mechanical tunnel effect.

As atomic physicists in Frankfurt have now been able to confirm, over 75 percent of the time they are so far apart that their bond can be explained only by the quantum-mechanical tunnel effect.

This is due, physicists explain, to the quantum-mechanical “tunnel effect.” They use a potential well to illustrate the bond in a conventional molecule. The atoms cannot move further away from each other than the “walls” of this well. However, in quantum mechanics the atoms can tunnel into the walls.

“It’s as if two people each dig a tunnel on their own side with no exit,” explains Professor Reinhard Dörner of the Institute of Nuclear Physics at Goethe University Frankfurt.

Dörner’s research group has produced this helium molecule in the laboratory and studied it with the help of the COLTRIMS reaction microscope developed at the University. The researchers were able to determine the strength of the bond with a level of precision not previously achieved and measured the distance between the two atoms in the molecule.

“The helium molecule is something of a touchstone for quantum-mechanical theories, as the value of the binding energy theoretically predicted is heavily dependent on how accurately all physical and quantum-mechanical effects were taken into account,” explains Dörner.

Even the theory of relativity, which is otherwise mainly required for astronomical calculations, had to be incorporated here. “If even just a small mistake occurs, the calculations produce major deviations or even indicate that a helium molecule cannot exist at all,” says Dörner. The precision measurements performed by his research group will serve as a benchmark for future experiments.

Dörner’s research group began investigating the helium molecule back in 2009, when the German Research Foundation awarded him a Reinhart Koselleck Project and funding to the tune of € 1.25 million.

“This type of funding is risk capital, as it were, with which the German Research Foundation supports experiments with a long lead time,” explains Dörner. He was thus able to design and set up the first experiments with his group. Initial results were achieved by Dr. Jörg Voigtsberger in the framework of his doctoral dissertation.

“In the search for atoms which ‘live in the tunnel’, Jörg Voigtsberger spent two years of his life in the cellar,” recalls Dr. Till Jahnke, senior lecturer and Voigtberger’s supervisor at the time. It is there, in the cellar, that the laser laboratory of the atomic physics group is housed.

Stefan Zeller, the next doctoral researcher, considerably improved the equipment with the help of Dr. Maksim Kunitski and increased measurement precision still further. To do so, one of his tasks was to shoot at the very weakly bonded helium molecule with FLASH, the free-electron laser at the DESY research centre in Hamburg and the largest “photon canon” in Germany. “Stefan Zeller’s work was remarkable.

It was his untiring effort, his excellent experimental research skills and his ability not to be disheartened by temporary setbacks which made our success possible at all,” remarks Professor Dörner, Zeller’s doctoral supervisor.