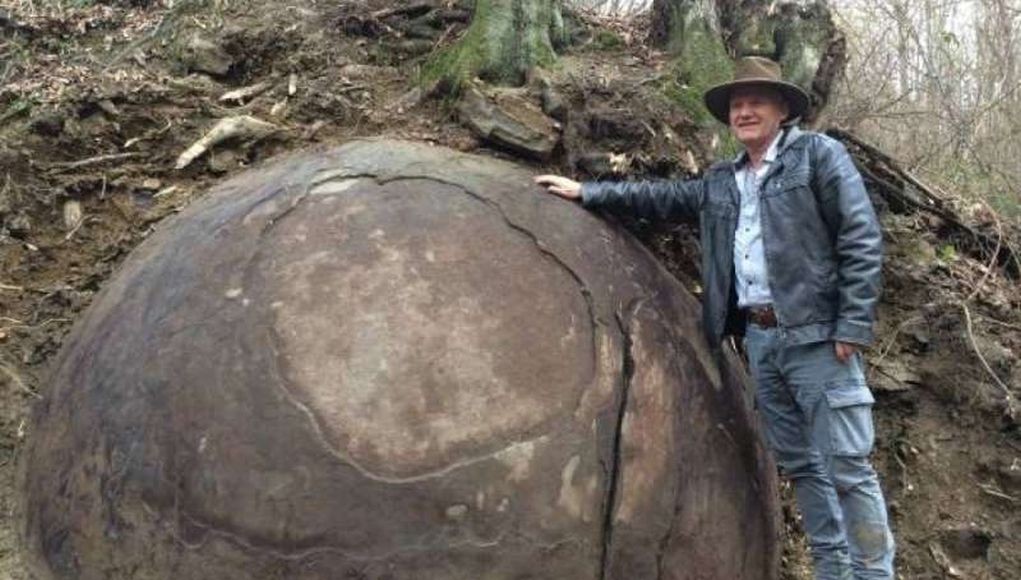 An archaeologist is looking at a rock with great interest, a sphere unearthed in a forest, believed to be part of ancient civilization. Or is it just a very big rock?

A stone ball in Podubravlje village near Zavidovici, Bosnia and Herzegovina was seen earlier this month, in the ground, in a forest.

What can it tell us? Archaeologist Sam Osmanagich, who called his Bosnian stone ball the most massive in Europe, has some interesting answers.

“I’ve been researching prehistoric stone ball phenomenon for 15 years,” he blogged last month.
“By the mid of March 2016, it became obvious that the most massive stone ball in Europe has been discovered. Name of the location is village Podubravlje.”

He said actually less than half of the ball is uncovered. “Preliminary results show the radius to be between 1.2 – 1.5 meters. Materials have not been analyzed yet. However, brown and red color of the ball point to very high content of the iron. So, the density has to be very high, close to the iron which is 7,8 kg/c.c. If we take value of only 5 kg/c.c. we have all the elements for the preliminary calculation of the mass. Mass comes to be over 30 tons!”

Why does he view this discovery as significant? “First, it would be another proof that Southern Europe, Balkan and Bosnia in particular, were home for advanced civilizations from distant past and we have no written records about them.

Secondly, they had high technology, different than ours. Finally, they knew the power of geometrical shapes, because the sphere is one of the most powerful shapes along with pyramidal and conical shapes. No wonder, that pyramids and tumulus phenomena can also be found in Bosnia.”

If the huge stone in Bosnia is found to be hewn by human hands, it would be the largest man-made stone ball ever found – twice as heavy as the Costa Rican ones, said MailOnline.

Do other experts see the rock formation as proof of an ancient civilization which thrived there? Voice of America reported that some scientists said the rock was likely a natural formation and not a human construct.

Experts were quoted in MailOnline as saying they believed the boulder was not man made.

A lecturer at the University of Manchester School of Earth, Atmospheric and Environmental Sciences told MailOnline that the spherical stone may be an example of concretion. This is when a compact mass of rock is formed by the precipitation of natural mineral cement within the spaces between sediment grains. The result is often spherical in shape, with the process forming the famed Koutu boulders in New Zealand.

Experts at the Geological Society, according to MailOnline, said the round shape of the rock could come from spheroidal weathering. This is a type of weathering affecting jointed bedrock. The result is formation of concentric or spherical layers of highly decayed rock.