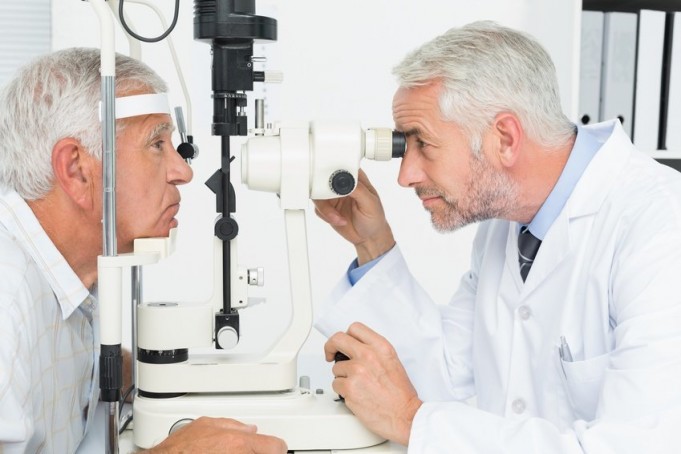 In a study of nearly 650 people with the eye disease age-related macular degeneration (AMD), half still had vision 20/40 or better, typically good enough to drive or to read standard print, after five years of treatment with anti-VEGF drugs that are injected into the eye.

The authors of the study, funded by the National Eye Institute (NEI) at the National Institutes of Health, say those outcomes would have been unimaginable about 10 years ago, prior to the drugs’ availability.

The results were published in the journal Ophthalmology and presented May 2nd at the annual meeting of the Association for Research in Vision and Ophthalmology (ARVO) in Seattle.

“This is the most comprehensive study of anti-VEGF therapy for AMD to date,” said NEI Director Paul A. Sieving, M.D., Ph.D. “It points to the importance of long-term follow-up in studies evaluating disease treatments.”

AMD is the leading cause of vision loss among older Americans. It causes damage to the central part of the retina, the light-sensitive tissue at the back of the eye. AMD often has very few symptoms in its early stages; but in later stages, it causes loss of the central, straight-ahead vision needed for activities like reading and driving.

There are two types of late AMD geographic atrophy, and the more common neovascular AMD, also known as wet AMD. In neovascular AMD, fragile blood vessels grow under the retina and leak fluid. This usually starts in one eye, and is stimulated by a protein called VEGF.

Just 10 years ago, people diagnosed with neovascular AMD were almost certain to develop severe vision loss in their affected eye and likely to lose vision in their other eye, too.

The new study looked at people with AMD who had regular treatment with drugs designed to block VEGF. After five years, 50 percent of them had 20/40 vision or better, 20 percent had 20/200 vision or worse, and the rest were in-between.

Ten years ago, the best available treatment for AMD was photodynamic therapy in which an intravenous drug (injected into a vein) and laser are used to seal off leaking blood vessels. Past studies have found that just one year after diagnosis, less than 15 percent of patients given this therapy alone retain 20/40 vision, and up to 40 percent decline to 20/200 vision.

Without any treatment, less than 10 percent of patients retain 20/40 vision at one year, and up to 75 percent of untreated patients decline to 20/200 vision.

In the U.S., state drivers’ licenses generally require 20/40 vision in at least one eye. A best-corrected vision of 20/200 in both eyes is considered legally blind for the purpose of federal disability benefits.

The Comparison of AMD Treatments Trials (CATT) began in 2008 and was designed to compare the anti-VEGF drugs Avastin and Lucentis. VEGF is important in the growth and development of new blood vessels in normal and cancerous tissues. Avastin (bevacizumab) was approved by the Food and Drug Administration in 2004 for the treatment of metastatic colon cancer.
Other drugs were later developed specifically to target blood vessels in the retina, with Lucentis (ranibizumab) coming to the market in 2006 and Eylea (aflibercept) in 2011.

For treating AMD, the drugs are injected into the eye. Before Lucentis was available, many ophthalmologists began treating the disease with Avastin, which appeared to have similar benefits, at least in the short-term. The difference in the cost of the drugs also made Avastin appealing; the approximate per-dose price was $50 for Avastin and $2000 for Lucentis.

In the trial, more than 1200 participants with neovascular AMD were randomly assigned to receive either Lucentis or Avastin for two years, through monthly or as-needed injections. During that time, the two drugs were equally effective at preserving visual acuity. These results were later confirmed in five multicenter clinical trials around the world.

The current study followed up with CATT participants between March 2014 and 2015, an average of 5.5 years after enrollment in the trial. After two years on their assigned drug, participants were free to work with their eye care providers to choose their own course of therapy.

During that 3.5-year period, more than half received at least one treatment with a drug or therapy other than the drug assigned to them. The investigators obtained visual acuity measurements for 647 of 914 participants who were still living.

In addition to the overall effects of anti-VEGF therapy at five years, the investigators compared the outcomes of participants who received Avastin or Lucentis during the trial.

“Some experts had speculated that two years of treatment with ranibizumab might have long-term benefits superior to bevacizumab. However, at five years, there were no differences in visual acuity between the two drugs,” said Daniel F. Martin, M.D., chair of the Cleveland Clinic Cole Eye Institute and CATT study chair.

The study also found that after five years, participants assigned to Lucentis during the trial had a higher rate of strokes and heart attacks (7.6 percent) than those assigned to Avastin (4.5 percent). Since most participants received treatments other than their assigned drug after the two year-trial, the investigators are cautious about attributing this difference to the study drugs.

Finally, the study provides information on the general course of AMD with treatment. It was already known that many people with neovascular AMD eventually develop geographic atrophy, which has no treatment.

“Although anti-VEGF treatment has greatly improved the prognosis for patients overall, we still need to find ways to avoid poor vision in these patients and to decrease the burden of ongoing treatment,” said Maureen G. Maguire, Ph.D., the study’s principal investigator and a professor of ophthalmology in the Perelman School of Medicine at the University of Pennsylvania in Philadelphia.

Getting closer to an effective treatment for Parkinson’s

Dental implants with antibacterial activity and designed to facilitate integration into...