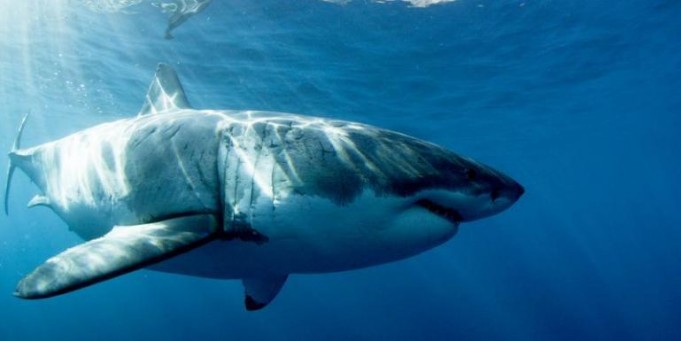 Long before the great white shark there was a bigger badder shark that roamed the seas. At the top of the food chain, no form of aquatic life stood in its way. The mega tooth shark a.k.a. the Megalodon, is an extinct species of shark that has fascinated scientists and inspired many works of fiction, both in literature and cinema. Here are 10 incredible fact about the Megalodon.

1. The Megalodon is considered to be the most powerful predator in vertebrate history and a better hunter than the great white shark. 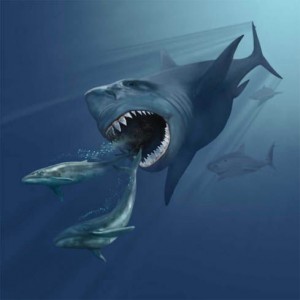 One specimen of a 9 meter (30 ft) long prehistoric baleen whale indicated that the Megalodon shark that attacked it focused primarily on the whales shoulders, flippers, rib cage, and upper spine, areas that great white sharks generally avoid. This was done to crush the bones and damage the vital organs within the rib cage .

The Megalodon were also adaptive. Evidence shows that during the Pliocene, the ancient sharks immobilize large whales by attacking their flippers first before killing and feeding.

2. The fossils of Megalodon teeth were once thought to be the petrified tongues of dragons. 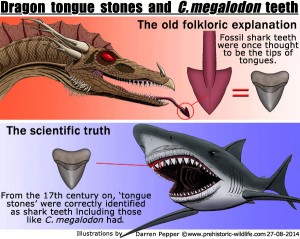 According to accounts dating back to the Renaissance, massive triangular teeth were often found buried in rocky mountains and were believed to be the fossilized tongues of dragons and snakes. It wasn’t until 1667 that they were recognized by Danish naturalist Nicolaus Steno as shark teeth.

Steno went on to famously produce a depiction of a sharks head bearing similar teeth and described the findings in his book The Head of a Shark Dissected.

3. The oldest Megalodon fossil is reported to be about 28 million years old. 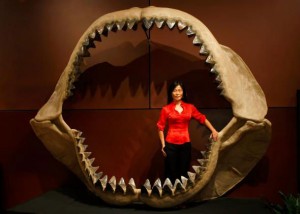 The earliest Megalodon remains were reportedly from the late Oligocene strata which makes them around 28 million years old, but a more generally accepted date for the origin of the Megalodon is the Middle Miocene, which was about 15.9 million years ago. It is believed that Megalodon became extinct 2.6 million years ago, by the end of the Pliocene.

4. Megalodon teeth are the largest in size of any known shark species. 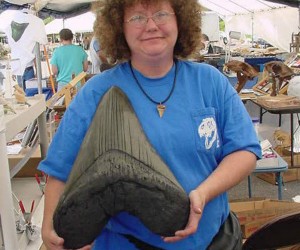 The initial scientific name for the Megalodon was Carcharodon Megalodon which is often dubbed informally as “Megatooth” shark. The name was given 1835 by Swiss naturalist Louis Agassiz.

Megalodon teeth are the most commonly found fossil regarding the ‘Megatooth shark’ with some findings measuring up to 180 millimeters (7.1 in) in diagonal length. Megalodon teeth are usually triangular, robust, have a v-shaped neck, and are large with fine serrations.

Most of the other Megalodon findings are poorly preserved as all sharks are made primarily of cartilage so scientists rely heavily on the information they can find from Megalodon teeths.

5. Megalodon ate pretty much anything under the sea that moved, including themselves. 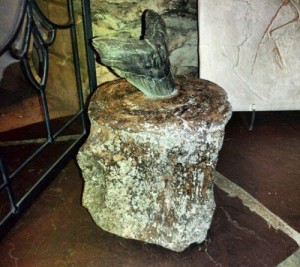 Megalodon also had a tendency to ba cannibalistic and like other sharks would have been piscivorous. 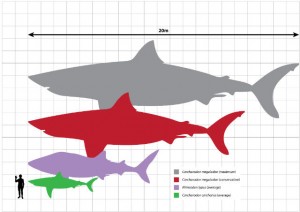 Megalodon gave birth to live sharks and the size (2-4 meters) has been indicated by the size of neonate Megalodon teeth. Young Megalodon preyed on fish, sea turtles, dugongs, and small cetaceans. Occasionally juvenile Megalodon would attack much larger prey. Teeth marks from a 4-7 meter (13.1–23.0 ft) shark were found on a rib from an ancestral great blue or humpback whale. Scientist believe that shark was a infant Megalodon.

7. A Great White Shark is about the size of a Megalodon’s penis. 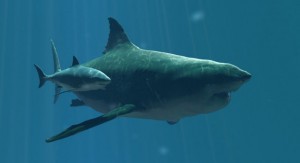 Peter Klimley a shark expert at the University of California at Davis stated that “A great white is about the size of the clasper, or penis, of a male Megalodon.”

Scientists have had trouble estimating the size of the Megalodon due to mostly only finding fossils of their teeth and vertebrate, but researches have concluded that the Megalodon is larger than the whale shark.

In 1990 marine biologists, Patrick J. Schembri and Staphon Papson suggested that the Megalodon may have approached a maximum of 24 to 25 metres (79 to 82 ft) in length, but as of present most experts acknowledge Megalodon reached a total length of about 16 meters (52 ft).

8. There are 3 main theories about why the Megalodon are now extinct.
Oceanic Cooling: This first theory suggests that accelerated changes in global circulation caused by the closure of the Central American Seaway (along with possible other factors such as Pliocene climate) set the stage for the build of of glaciers in the northern hemisphere consequently creating Ice Ages which cooled the oceans substantially. The Megalodon preferred warmer water so this may have impacted their resulted and eventual demise.

Decline in Food Supply: By the end of the Miocene many species that the Megalodon relied on for sustenance became extinct. Also the closure of the Central American Seaway caused further extinctions as well as cause faunal redistribution. This resulted in decreased diversity and abundance of great whales suggesting that most surviving species headed towards polar regions.

New Competition: This last theory is one of the least popular. It suggests that the emergence of raptorial killer whales contributed to the demise of the Megalodon. Fossil records show that the ancient whales could survive the new cold climates thus outlasting the mega tooth sharks.

9. Megalodon fossils have been found all over the world including areas that are far away from continental land. 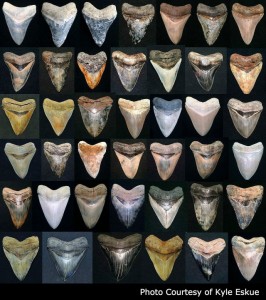 Fossil findings affirm that the Megalodon had a cosmopolitan distribution. Fossils have been dug up all over the world in places such as Europe, Africa and both North and South America, as well as Puerto Rico, Cuba, Jamaica, Canary Islands, Australia, New Zealand, Japan, Malta, Grenadines, and India.

Fossils have also been found distant from continental lands, such as the Mariana Trench in the Pacific Ocean.

10. The Megalodon’s bite force could have crushed a small car. 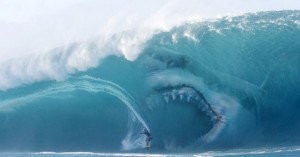 Stephen Wroe of the University of New South Wales in Australia and his colleagues estimated the bite force of a Megalodon by using data they collected by great whites. The team developed a computer generated model of a great whites skull, jaw, and head muscles from images generated by a CT (computer tomography) scanner. They then ran simulations to view the stresses, strains, and strength of its bite.